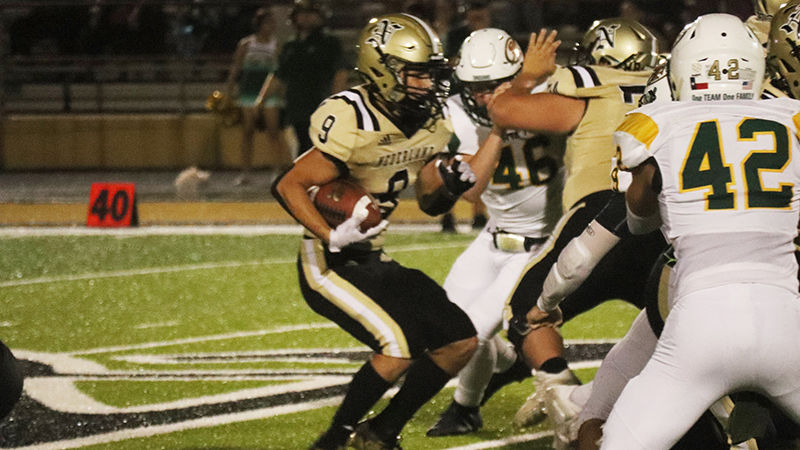 NEDERLAND — The Nederland Bulldogs could all but lock up a playoff spot for themselves and their in-county rivals with a win over Barbers Hill.

For Nederland, a win over the Eagles would leave Kingwood Park, who has not won a district game, and Crosby, which could be for a share of the district title, as its final two games on the regular season schedule.

A Nederland win would also be crucial for PNG, which owns the tiebreaker over the Barbers Hill, but also has Crosby and Texas City left on the schedule, who are the top two teams in the district.

Nederland bounced back from its first loss of the season to beat Dayton 41-14 last week.

Defeating Barbers Hill could prove to be a difficult task. The Eagles feature the top offense in the district, averaging more than 500 yards per game. Most of their games have been shootouts due to the fact they also allow nearly 400 yards per game, which puts them second to last in the district for defense behind a winless Santa Fe.

“Our defensive coaches do a great job of teaching kids about formation and tendencies,” Barrow said.

“It allows our players to know where they like to go based on formations and those things. Our defense typically responds well when they are challenged. We let them know Barbers Hill averages 500 yards a game. It will be fun to watch our defense try to live up to that challenge.”

The Bulldogs enter the game with a much-needed boost for the offense, which ranks as the third-worst in the district for yards per game.

Nederland’s defense has been lights out for the year, holding opposing teams to 247 yards per game (second place). Besides first-place Texas City, no other team has held opposing offenses to less than 300 yards per game.

“Our offense is going to have to help our defense out, too,” Barrow said. “We ran the ball a lot better this past Friday. Our defense’s best friend is our offense running the football.”

Kyndon Fuselier, who plays receiver and defensive back, said he is ready for the challenge.

The Bulldogs have been trying to find different ways to get him the ball as defenses show him more attention this season.

The All State receiver is often double and triple teamed, forcing coaches to get more creative.

“You usually don’t know until the game starts how they are going to play him,” Barrow said. “His numbers are the same as last year for different reasons, but his value is what defenses have to change to account for him. It changes everything. We look at how teams play him out wide or in the slot or in trips and go from there.”

Barrow said teams try to disguise the double coverage to bait the quarterback to throw his direction.

Fuselier said he has to be patient.

“I got some of this last year but it wasn’t like this year,” he said. “I have seen someone outside of me press and then a linebacker come at me as soon as the ball is snapped and then the safety over the top. That was in the Silsbee game.”

Fuselier has seen his fair share of handoffs on sweep plays as a means to get the ball in the playmaker’s hands.

Kickoff is set for 7:30 p.m. Friday at Bulldog Stadium. Those not able to make the game can catch the live stream on the Sheffield Productions YouTube page.