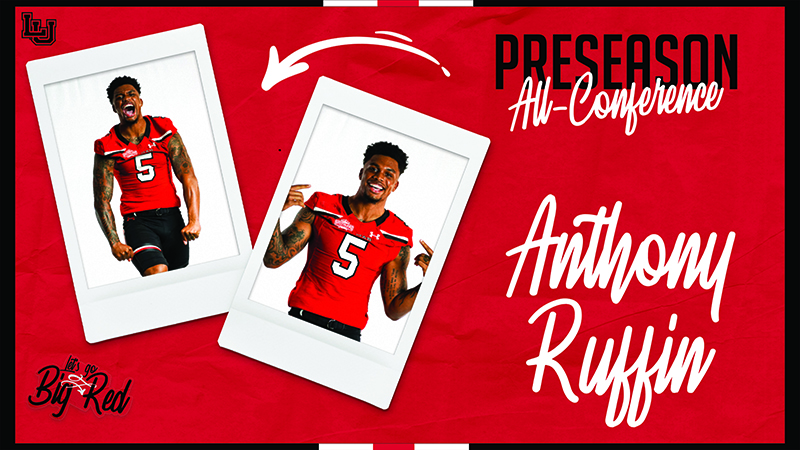 Lamar University junior defensive back Anthony Ruffin has been named 2021 Preseason All-Western Athletic Conference announced league officials Tuesday morning. The honor comes following a COVID-shortened 2020 season that got pushed to the spring semester due to the pandemic.

Ruffin closed out the 2020 campaign with postseason all-conference honors.

“I think it’s hard to do an all-preseason team when you haven’t seen some of the team’s that you’re going to be playing or had limited exposure to them. With that being said, it’s a tremendous honor that Anthony has been recognized by the other league coaches,” said LU head coach Blane Morgan.

“Anthony represents LU football and what we stand for and what we’re all about. We’re looking forward to what he can do on the field this season.”

Ruffin played in and started all six games in the Cardinals’ secondary. He finished the year ranked fourth in the league in passes defended, and tied for tops in the Southland in interceptions, despite having played fewer games than the two he tied with.

Ruffin also led the team and finished 12th in the league with 43 tackles (7.2 pg), including 22 solo stops.

He recorded a season-high nine stops in the finale against Southeastern Louisiana, but his best game of the year came against nationally ranked Sam Houston where he recorded a team-high eight tackles – including one for a loss – and picked off a pass.

Ruffin played a huge role in helping the Cardinals finish in a surprise tie for fifth in the Southland standings last season. Picked to finish last in the preseason poll, the Cardinals stunned the league with victories over McNeese and Northwestern State, despite opening the year with more than 50 freshmen on the roster and numerous freshmen in starting lineup.