MONIQUE BATSON — Community theater is back, and you should be taking advantage 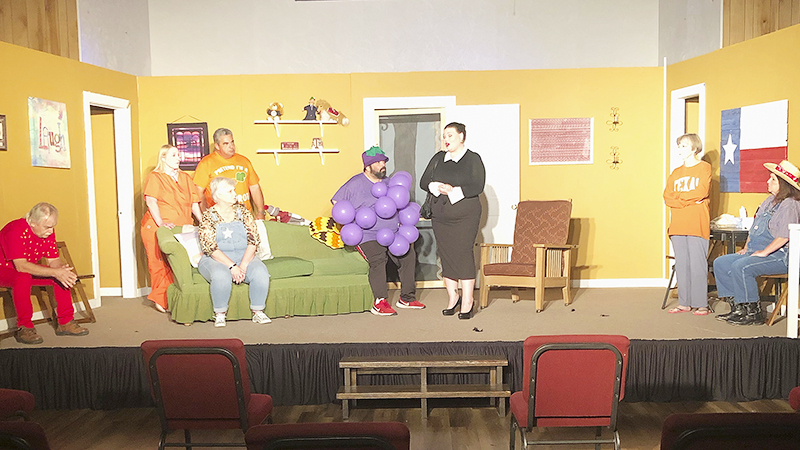 The cast of “Honky Tonk Hissy Fit” rehearses for the show that opens tonight (June 18) at The First Christian Church, 5856 9th Avenue. (Courtesy of Craig Bertrand)

While I’ve always been dramatic, I never considered myself theatrical. I can sing just about any classic Broadway song (and Christmas carol) due to years in choir. I absolutely love musicals and stage shows, and secretly wish we lived in a world where people did just break out in a synchronized song and dance number in the middle of the day.

Or at least, was not.

In 2011 (I think), my daughter decided she wanted to audition for a munchkin role in the Port Arthur Little Theatre/Lamar State College Port Arthur’s joint production of “The Wizard of Oz.”

Read here about the Act One Scene One show, “Honky Tonk Hissy Fit,” which starts today.

I had never seen a community theater show before, but was extremely supportive of this, as she was 9 and very much a theatrical child. So I did what any supportive parent would do and agreed to audition with her to make her less nervous. Unfortunately, no one was there to make me less nervous. I’d never done anything like that in my life.

And my child did what children do and backed out at the last minute — after I had done the whole Dorothy thing in front of God and everyone. It wouldn’t have mattered, because directly after me walked in Judy Garland. And obviously I don’t mean the real one, but it took a few glances to realize that. From the pigtails to the glittery red shoes, this girl was born for that yellow brick road.

But while we were waiting around, a friend approached me and said he would soon be directing a show for Port Arthur Little Theatre and asked if I would audition. I said yes with no intention on doing so.

But when time came and he asked again, I couldn’t back out of my agreement. What would it hurt, anyway? Go sing for a minute, dance a bit, read a line and be on my way.

Two days later he called to tell me I had been cast as a principal actor in “The 25th Annual Putnam County Spelling Bee.”

I’m sorry, a what? Like, with the singing and the dancing and all those lines?

Practice a little, do a show — it couldn’t be too hard.

And that would be the biggest understatement I’ve made in my life.

All of a sudden I was a mom of four school-age kids with a full-time job rehearsing 2-3 hours a night after work every weekday for six weeks. When I was in my car, the show soundtrack was playing so I could memorize songs.

When I was in the shower, I was practicing choreography. And my character happened to speak six languages (if you’re familiar with the show you know that’s what defines her), all of which were incorporated into a solo I had to dance along to while singing, and so I found myself practicing dictation to languages I’d never even heard spoken before.

That all preceded the three weekends of four shows each, all of which required audience participation and could literally go in any direction. I wasn’t prepared for the random and hilarious things that would happen unscripted. There’s probably still a scar on the inside of my lip from biting it to keep from laughing. My character, after all, was not known for her humor.

The day I left the last show, I broke down in tears on the way home. In a sense, I was relieved not to worry about the grueling rehearsal schedule on top of my regular duties. I felt like I was failing my children by never being home.

But the majority of my tears came from leaving something that had become so personal to me. I couldn’t imagine not being in that Putnam world with all of the amazing cast members.

So if you’ve never seen a community theater show before, here’s what you should know: