Act One Scene One returns with 1st show since virus shutdown, including dinner 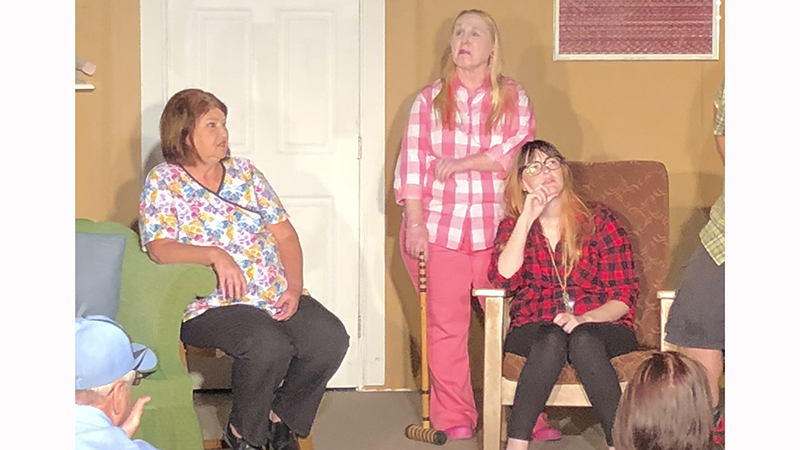 Vicki Linthicum, Ann Holland and Taylor Vandevender perform with Act One Scene One during a previous show. (Courtesy photo)

After the last year, it’s time to be entertained.

And Act One Scene One has all intentions on doing just that with its first production since the start of the pandemic.

“We are all excited to get back,” said show director Craig Bertrand. “Everybody was so excited to see each other again. We have had so many people over the past 18 months that we see out and about tell us they can’t wait until we start doing shows again.”

The play, called “Honky Tonk Hissy Fit,” is a continuation of a series the production company started prior to the shutdown.

“The show is about this small little community in Doublewide, Texas,” said Matt Hall, who plays Baby Crumpler in the production. “But you can take the name and figure out the community type. My character is the town sheriff/fire marshal…he kinda wears every hat. When I read the play I pictured Larry the Cable Guy.”

Hall said the show is the third in a three-part series, and those who were cast in the second were given first choice at resuming their roles.

“Anyone coming to see it might see the same characters and same people playing the characters,” Bertrand said.

There are nine cast members, all of whom have been rehearsing Monday through Thursday for up to three times a night on top of full-time jobs, he added.

Unlike most community theater productions, this one comes with dinner and a show.

For years the production company has partnered with The First Christian Church, 5856 9th Avenue, where they perform. The church provides dinner before the show begins.

“It’s silly, it’s funny and it’s a family-friendly show. Everything that Act One Scene One does is family friendly,” Hall said.