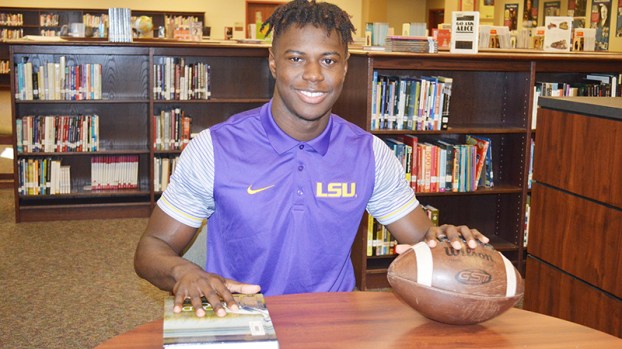 Memorial High School senior Kary Vincent Jr. successfully combines sports and academics and is in the top of his class. (Mary Meaux/The News)

Memorial High School senior Kary Vincent Jr. has a deep-seated self-motivation and a thirst for knowledge as strong as his skills in athletics.

Sports fans likely know of his accomplishments on the field; from winning the Class 6A 200-meter championship as a junior, being ranked at No. 23 in the ESPN Top 300 recruits for the class of 2017 to being the second ranked cornerback in the nation and the No. 4 overall recruit out of Texas. He is even scheduled to play in the 2017 Under Armour All-America game held Jan. 1 in Orlando, Fla.

“It does not happen often, but as an educator, we are thrilled when it is found. This quality is the thirst for knowledge,” Stephanie Rhodes, English IV AP instructor, said of Vincent. “The subject does not have to be one the student is interested in. The pursuit of something new to know is enough. These students are a joy to teach; because the educator can see the look of everything clicking into place.”

Vincent, she said, is one of these students.

“The AP class is a challenge and Kary has been up to the task,” she said. “We have followed the curriculum and he has kept his grades up even while going to the playoffs. I find this a great attribute, because he will always want to learn and that is what educators strive for, to develop lifelong learners.”

Vincent, she said, is very self-motivated, knows when he must study and when it will take more effort to make a higher grade.

“He’s also funny and as quick with a comment as he is on the field,” she said. “I wish the best for him. He is a strong-minded, smart student who will do very well.”

Vincent learned at an early age that sports requires not just physical prowess but mental prowess as well.

He began playing Pop Warner football at the age of 7 and through the years learned the skill as well as learning about track.

“To do track you have to be mentally tough,” Vincent said.

Vincent has also learned of a correlation between athletics and leadership. Besides being enrolled in advanced placement courses at the high school and being in the top of his class he’s also a member of the Student Advisory Board.

“We meet with student representatives of each school, come together and talk about the good things in the district and thoughts on what can be improved,” Vincent said. “The most trustworthy at each school is chosen for this. I’ve learned that to be an athlete you must look at yourself as a leader. You can do what you put your mind to. Just a year ago nobody could have told me I’d sign with Louisiana State University.”

Vincent has had 35 total school offers in a matter of a year. Through that he has learned that when you work hard you will be rewarded for your efforts.

While in college at LSU, Vincent will pursue a bachelor’s degree in communications as preparation for his future.

“I want to go into the NFL but first and foremost I want to obtain a bachelors in communications so after football I can become a TV commentator or analyst on football,” he said.

Vincent’s father was a receiver at Texas A&M University, was drafted in the sixth round of the 1992 NFL draft by the New Orleans Saints and played arena football as well. He also helped coach his son.

“My mentors will always be my mother and father. With sports, it’s strongly my father. My mom supports me unconditionally. She doesn’t know football as much but she says to do what makes me happy and to the best of my ability. She tells me good boys get good things,” he said. “I wasn’t always the best student, wasn’t always at the top of my class but you live and learn. That’s why me and my family feel so blessed.”

Both on and off the field Memorial football players work to motivate each other, he said.

“We compete with each other. I wouldn’t be here without being competitive,” he said. “And when we combine, we want to be successful and want to see our peers successful and that’s what makes it so great.”

Being a teammate means building relationships. On weekends and after practice the teammates will meet at one of their homes, play video games and one of the parents will likely order pizza for the group.

Vincent has lived in Houston and Port Arthur and has a home church in both cities. In Port Arthur, it’s New Hope Baptist Church and when visiting family in Houston, it’s New Light Christian Center.

All of this goes together to make Vincent a well-rounded student with an eye to the future.

Memorial and LSU graduate Kary Vincent Jr. was drafted by the Denver Broncos Saturday. Vincent was the ninth selection in... read more