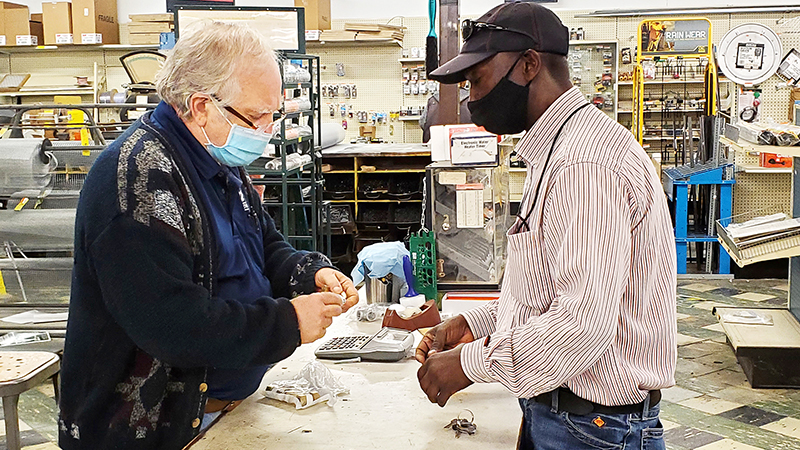 Horace Newcost was like many individuals in the area, searching for plumbing supplies.

The Port Arthur man stopped by Drago Hardware Company on Ninth Avenue for some plumbing parts and spoke with owner Joe Drago mid-morning on Tuesday. Newcost came away with several small brass fittings, but the pipe he needed wasn’t in stock at the time. He called a business in Nederland and has been put on a waiting list.

This — the need for plumbing parts — seems to be the norm for an area that saw record breaking cold temperatures, snow and freezing rain last week.

Drago has been busy, needless to say.

“The big problem is we can’t get merchandise right now,” Drago said. “The order we placed Thursday before the storm just came in this past Monday and was gone by 10 a.m. and the order after that may be here next Monday.”

One problem with the shipping and trucks delivering merchandise was they couldn’t travel over some bridges.

But all in all, even with the urgent need for parts, people are civil.

“It’s a madhouse but everybody is in a good mood,” Drago said. “They’re frustrated but good with it.”

Mark Antilley, store manager at Lowe’s on Memorial Boulevard in Port Arthur, said most customers over the past five or so days were coming in due to busted pipes and water issues.

It did get extremely crazy, he said, so the most sought after items were placed on carts and spaced out in order to be safe and socially distant.

“We ran out of a lot of stuff,” Antilley said. “Emergency trucks were brought in that night and now it’s pretty stable.”

Most plumbing seekers are contractors and do-it-yourselfers.

Antilley doesn’t expect to see a quick end to the need.

“This is still a continuing thing,” he said. “It’s not going to end by the weekend. The biggest thing is to get a water source to your house for toilet and sanitation reasons. Then there are the irrigation systems. That will be an ongoing deal for weeks.”

He called it devastating. 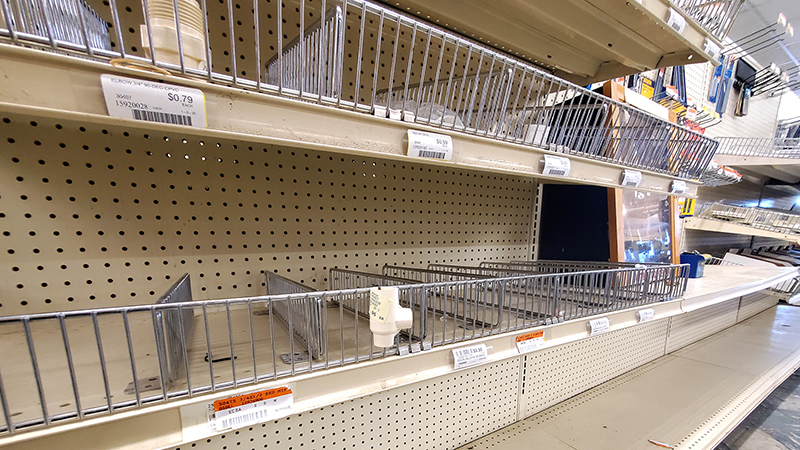 Shelves for plumbing fittings are near bare at Drago Hardware on Tuesday. (Mary Meaux/The News)

The extreme and unusual cold caused a lot of damage in cities while area residents were without water access and drinking water.

Donnie Stanton, interim director of utility operations for Port Arthur, said the city had between 80 to 100 main line breaks as of Monday.

And this doesn’t count property owners.

An employee in Stanton’s department said he couldn’t remember a similar situation in the past 21 years. The only weather related event that comes close was the drought in 2011, but even then there was not as bad of a water pressure problem.

A break in a 24-inch line was a major issue and there were breaks in 16-inch lines in a few places. Other size lines, 10, 6 and 8 inches also had problems.

Plans to deal with infrastructure by hardening the water and wastewater assets and improve them are on the drawing board for the 5-year capital program plan, Stanton said.

Port Neches was one of the first local cities to rescind its boil water notice for residents.

There was a greater demand for water than could be produced by the Water Treatment Plant in addition to, and importantly, the Ridgewood water tower being out of service for maintenance, which impacted the ability to sustain pressure during the high use period of time.

This demand caused the water system pressure to fall below the 20 psi threshold required by the TCEQ, which then resulted in the boil water notice.

The City’s Water Treatment Plant has backup generators, so while the lack of power was not ideal, it did not prevent water from being produced.

This, Wimer said, is why the city continually stressed in its messaging for customers to report any water leaks or broken lines.

Wimer said it’s important to remember water is provided within the distribution system through a combination of water production and water pressure, which is sustained by the City’s ground storage and elevated storage capacity.

“As consumption increases, the storage capacity is ultimately reduced, which then impacts pressure,” he said. “Typically, it is possible to concurrently work to refill storage while also supplying additional flow, but in the case of last week, the demand for water was so great that it was not possible to supply both storage and water consumption. As storage capacity was depleted (again recognizing that the City was operating on only two water towers, not three), that resulted in the pressure loss.”

The city of Groves was the last in Mid- and South Jefferson County to rescind its boil water notice.

It too saw winter storm damage but in a different way.

Groves had only one city line break, city manager D.E. Sosa said. All others were on private property and had to be turned off at the meter.

“We lost 6 million gallons in 12 hours after that cold 15 degree night,” Sosa said.

Besides the one city line leak there were more than 200 turn-offs of private property leaks.

Sosa said the city has a large water system with 6 million gallons of storage that must be filled first.

In addition, the city needs to ensure it had chlorine at the farthest reaches of the system that is over five miles in some areas.

It took the city until 2 p.m. Sunday to get chlorine to all areas of the system and do testing. Officials received the results Monday at 2 p.m. — which was as fast as the city could go and still ensure the safety and health of customers, Sosa said.

A spokesperson with the city of Nederland was still tabulating the line breaks as of press time Tuesday.