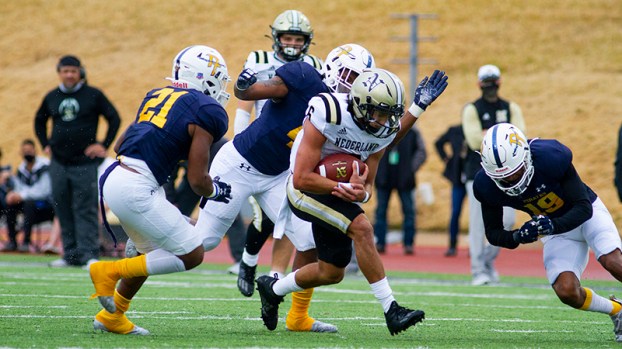 Nederland quarterback Rene Cunningham is swarmed by the Pine Tree defense as he runs for a first down during the 5A Division II Region III Area playoff game on Saturday, (Dec. 19) at Homer Bryce Stadium in Nacogdoches. (Courtney Case/Longview News-Journal)

NACOGDOCHES — For the first time since 2012, the Nederland Bulldogs will play in the Region III semifinal of the 5A Division II playoffs after defeating Pine Tree 34-21 at Homer Bryce Stadium on Saturday.

The Bulldogs defense weathered the storm early as Pine Tree (9-2-1) broke off gushing runs but did not break containment. The Bulldogs offense did some sputtering of its own in the first quarter as the game remained scoreless until late in the first half.

After a slow start, the Bulldogs (9-2) went into their bag of tricks to complete a hook-and-lateral play for 47-yard touchdown with 5:53 left in the first half.

With 2:02 left in the half, the Bulldog defense forced the Pirates to punt the ball down to the Nederland 23.

After a run by quarterback Rene Cunningham, backup quarterback Corbin Chandler came in and hit receiver Kyndon Fuselier for a 64-yard catch-and-run touchdown with 31 seconds remaining in the half.

The halftime didn’t cool down Fuselier, who caught a 63-yard pass to get the ball inside the Pine Tree 5-yard line. Beau Seymour punched it in on a 3-yard run on the following play to give the Bulldogs a 27-0 lead with 10:33 left in the third quarter.

At the end of the third quarter, Pine Tree got on the board with a 12-yard run. The Pirates recovered the onside kick and scored on a 34-yard pass five plays later to pull within 27-14.

After a slow start, the Nederland coaching staff dialed up a hook-and-lateral play to score from 47 yards out. Cunningham connected on a short pass to Fuselier, who on a curl route pitched it back to receiver Evan Whitehead, who ran it untouched the rest of the way. The play sparked the Bulldogs, who scored 27 points in 7 minutes of gameplay.

Fuselier, who finished the day with five catches for 153 yards, two receiving touchdowns and a pick-six.

Mazyck finished the day with 16 carries for 125 yards and a rushing touchdown.

Nederland will take on Fort Bend Marshall in the region semifinal at 1 p.m. Dec. 26 at Turner Stadium in Humble.

Indictment: Man steals $480 in purses from Mall, caught getting into stolen truck