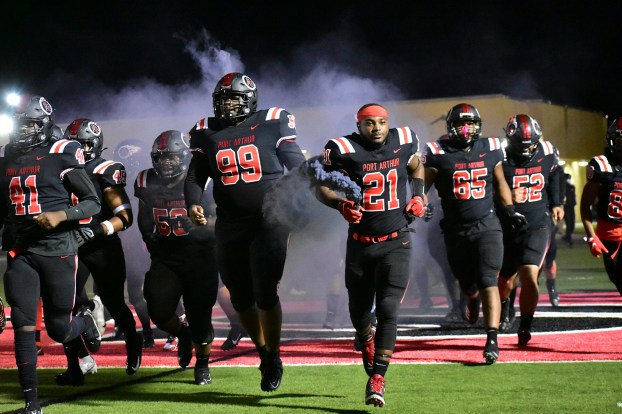 Prior to the Memorial Titans’ 46-28 win over the Friendswood Mustangs, coaches sat with players and watched film from 2018. They weren’t trying to gain an advantage on an upcoming opponent, but instead seeing how a team could limit its own potential.

The game was the 2018 5A Division I first round playoff against Richmond Foster. It was Memorial head coach Brian Morgan’s first year. The Titans finished the regular season 9-1 and were runners-up in the district, but the team was plagued by sloppy play and unnecessary penalties.

The Falcons finished the season third in 10-5A-I, but lower-seeded Richmond Foster defeated the Titans 20-19.

Morgan said the 2020 Titans have learned from the 2018 team’s mistakes.

“They understand how good that team was and how we didn’t reach our potential,” he said. “The seniors that are playing were sophomores on that team. Jordon (Thomas), (Branden) Chaney and Tre’Vonte (Caines) were playing and they saw it live. Christian (Thomas)’s older brother was on that team. Those guys understand. They know that team was really, really good and didn’t reach our potential, because of a lack of discipline and a lack of focus.”

Offensive coordinator Rashard Colquitt, who was on the Memorial staff before Morgan was named head coach in 2018, said the Richmond Foster loss still haunts him.

“That one and the year before when we lost to Temple still sit with me,” he said. “Those are still in the back of my mind. We remind those kids of that and let them know just because they are talented, they can be beat.”

Morgan said the undefeated season does not add any extra pressure to succeed in the playoffs.

“Obviously, there are no makeups when you get to this point,” he said. “We have to come out and play.”

Morgan said Hightower would be another tough opponent.

“Hightower is a good team,” he said. “This is not a cake-walk first round, like you sometimes get with a No. 4 seed. They can be really explosive. It is always hard gauging a team when you don’t have any common opponents. You have film, but it is hard to tell how fast or strong some of those guys are. You don’t really know. It all depends on which team you get. Sometimes they can play lights-out and really well and sometimes they don’t.”

The Falcons average 33 points per game, but give up an average of 33.6 ppg to opposing teams.

The Titans finished district play ranked at the top of their group in offense and defense on the way to the first undefeated regular season in school history.

Final District 9-5A Division I standings

PNG not worried about past against familiar playoff foe