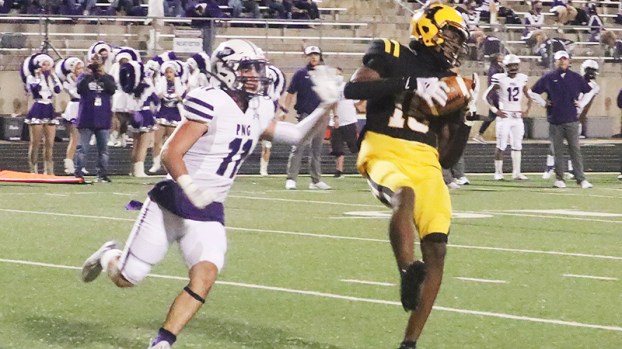 MISSOURI CITY — While the Port Neches-Groves Indians dominated the time of possession, they ultimately ran out of time as they fell 21-14 to the Fort Bend Marshall Buffalos at Ken Hall Stadium on Thursday.

It’s the third year in a row the Buffalos eliminated the Indians.

Along with holding on to the ball longer, the Indians outgained explosive Marshall in total yards, 337-225.

The Indians (5-6) almost completely reshaped their offense, which is normally pass-heavy, to a ground attack to help control the clock, head coach Brandon Faircloth said. 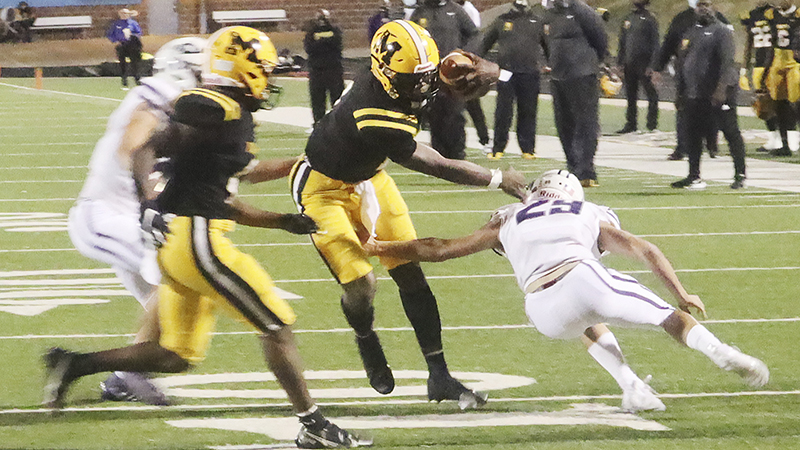 “We wanted to limit their possessions,” he said. “[Marshall] has an extremely explosive offense. Coach [James] Williams and his staff do a great job. We wanted to keep that clock running and get to halftime as fast as we could and see if we had a chance to win at the end. I can’t tell you how proud I am of our players for executing that. They never gave up. We just came up a little short at the end.”

Marshall (10-0) jumped out to an early lead on the opening drive, but the Indians responded with a score of their own on a 7-yard run to knot the game at 7-7 with 8:20 left in the second quarter.

The Buffalos followed with a six-play, 66-yard drive that took a little over a minute off the clock, scoring on a 15-yard run to take the lead back.

On the first drive of the second half, PNG marched down field on an 11-play drive that took 6:20 off the clock and ended with a 31-yard touchdown run by Bost to tie the game at 14-14.

Even with the drained clock, the Buffalos wasted no time, opening the next drive with a 53-yard run that placed the ball deep into Indian territory. Four plays later, Marshall scored on a 1-yard run, completing a drive that took 1:25.

After a punts by both teams, senior quarterback Blake Bost threw a pick inside the Marshall 5-yard line with a few minutes left in the game. The PNG defense forced a punt that stopped at the PNG 15 with 40 seconds left in the game. A couple of Bost heaves came up short as time expired.

Several players were teary eyed as they left the locker room after the game.

“We told them how much we loved them,” Faircloth said. “Football is such a game of relationships. You get so close as a team. High school football exists for two reasons — to learn lessons that can take you really far and live and to build memories. This team was able to do that this year.

With 3:29 left in the game, the Indians trailed the Buffalos 21-14 but were on the move. Bost took a shot down the left side of the field, but his intended target slipped and a Marshall defensive back caught the ball inside the Marshall 5. The turnover all but ended the game.

The PNG coaching staff for creating and executing a perfect game plan. Earlier in the week, Faircloth said the Indians would have to keep the Marshall offense off the field. PNG outgained the offense that averaged nearly 60 points for the regular season and hold them to only 21 points.

Prior to the Memorial Titans’ 46-28 win over the Friendswood Mustangs, coaches sat with players and watched film from 2018.... read more