CULINARY THRILL SEEKING — The beet goes on, and into your mocktail 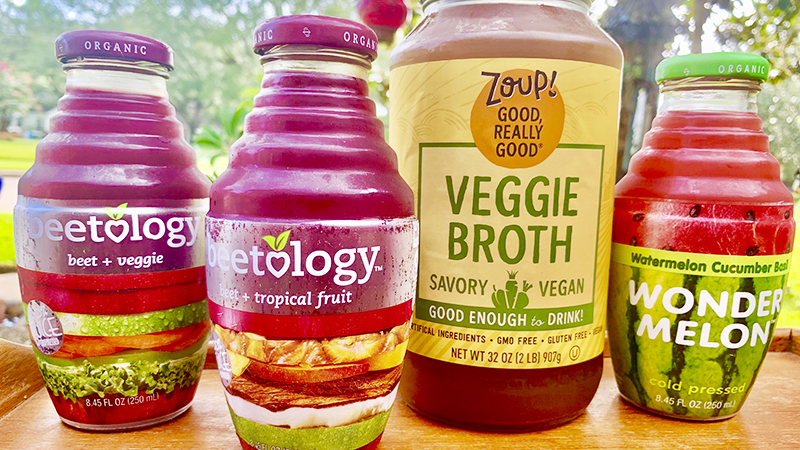 Don’t run away from a Beetology cocktail to pair with a summer Zoup. (Darragh Doiron/Special to The News)

If someone invited you for cocktails/mocktails and at the last moment mentioned they were beet-based, you might hightail from that cocktail.

Are you being punished?

I’d run from the rare serving of red stuff when I was a kid, but oh, look what they’ve done to beets now. Beetology comes in a very cool ridged glass and with mixes like beet + lemon + ginger you feel healthy just picking up the bottle. I added some to sparkling water for extra bang.

Makers have more ideas for that and Wonder Melon, which zings an old fave with splashes of lemon, cayenne and more fun.

Are you still running? Get these bottles in refrigerated sections of stores and sit down to enjoy the flavor and the benefits from KAYCO, because they’re into health.

Beet Juice bits from the makers:

Reasons to drink your watermelon

Buzz all ingredients in a blender and enjoy.

1 and one half cup ice

Blend all ingredients in a blender until frothy. Garnish with a pineapple slice.

There’s a reason National Soup Month is in January. Have you been craving a steaming bowl of chicken noodle in steamy Southeast Texas temperatures?

If not, think again with a jar of inspiration: Zoup! Good, Really Good® Veggie Broth. It’s okay to think about corn and beet gazpachos instead of the hot and heavy soups.

Zoop! has you covered. I enjoyed this “savory” vegan flavor as much as bone broth and I accepted the label’s challenge: “Good Enough to Drink.”

I simply heated up some of this jar’s broth and poured it in a mug to enjoy… in an air-conditioned space. Broth is the basis of making everything you’re making with it better. Zoup! Is good to begin with.