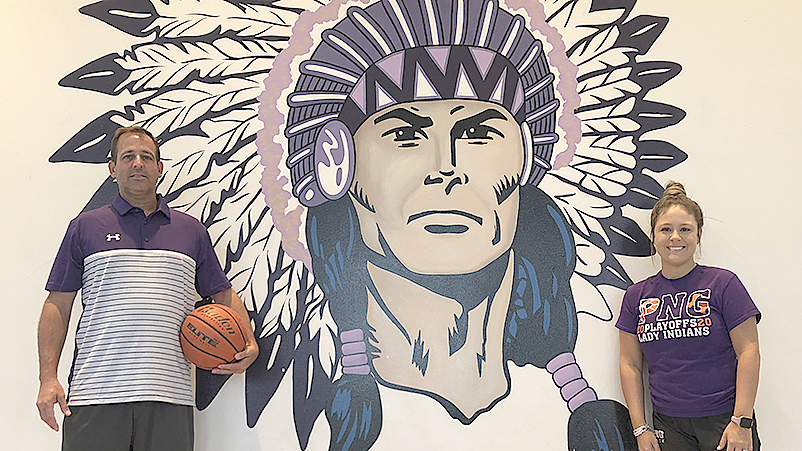 Lance Robertson likes what he sees so far from the Port Neches-Groves girls basketball team.

It’s thanks in no small part to the groundwork laid by former coach Kara Skinner.

“Coach Skinner did a great job, for one,” Robertson said. “I just want to go ahead and say that. Skinner did an unbelievable job. Two playoffs in the last two years is awesome. It’s a great start for Port Neches and I hope to keep it going.”

Robertson will have some great help from assistant coach Jessi Farmer, who not only worked under Skinner but also worked under Robertson in the past at Bridge City. Farmer can hopefully bridge the Skinner and Robertson eras, and she’s in a position to do so, she believes.

“I think that he knows what I expect. I know what he expects,” Farmer said. “I know what’s coming out of his mouth before he’s going to say it. I know what he wants from the kids and I know how these kids operate. Whatever he’s trying to get from them, I’m able to tell him, ‘Well this is going to work best with this person, and this is going to work best with that person,’ because at the end of the day, us knowing each other so well and me having been with these kids already, it’s really going to benefit him to have that backbone here, too.”

What worked in the past for Skinner can continue to work for PNG going forward as well, thanks to Farmer’s experience.

“Port Neches always shot the ball very well,” Robertson said. “A lot of that comes with Coach Skinner’s drill. I let Farmer continue to run the drill, and we’re going to stick with that. We’ll bring in some of my shooting drills but that will always be after we use her form shooting drills. If it’s working, why change anything?”

Some things do change, though. Robertson says he’s working on building a man-to-man defense based on what he’s seen from the summer workouts and summer league games the PNG squad has participated in so far.

PNG joins Little Cypress-Mauriceville, West Orange-Stark, Deweyville and Bridge City in a summer league that plays games with no audience at a pair of churches in Orange. Their first game was on Monday.

“Skinner did a great job of that last year,” Robertson said. “As a matter of fact she hosted it here last year. The West Orange boys coach and girls coach are hosting it this year.”

Robertson favors a man-to-man defense, but he said that depends on the kind of talent on a team.

“So far watching these girls, I think we can play a lot of man-to-man because they have a lot of quickness,” he said. “We just have to learn how to self-evaluate a little and understand our tendencies.”
Much of this year’s strategy on offense is going to be built around transition. This is a strategy Robertson likes for its ability to keep down the time it takes to get into positions.

“I try to do everything transition-wise,” Robertson said. “All of our offense will be predicated off of transition offense. If my point guard moves into the fly-right or fly-left, that’s the play we’re in, automatically. We won’t even have to call it.

“We always like to get the ball up the court as fast as possible. If we can get down there we’re automatically in the play and the girls will know that right away. Instead of five seconds of setup, we’re already in it. That’s always been, throughout my basketball coaching career, a great advantage for us.”

Seniors Avery Girouard and Shelby Letulle are stepping up into leadership positions to help the younger players adapt, and they’re doing quite well, Robertson says. Robertson is already a resident of Groves and known to some parents. His community familiarity has been a big help getting buy-in for his new coaching approach.

“Anytime the parents buy in, the kids buy in also, and that’s a big plus,” he said.

Farmer sees great things happening for PNG and for Robertson.

“He’s built up a lot of momentum,” she said. “The kids are really excited, they’re here and they’re ready to work. I think that if he can keep up this momentum that he’s got going then he’s going to absolutely do great things.”