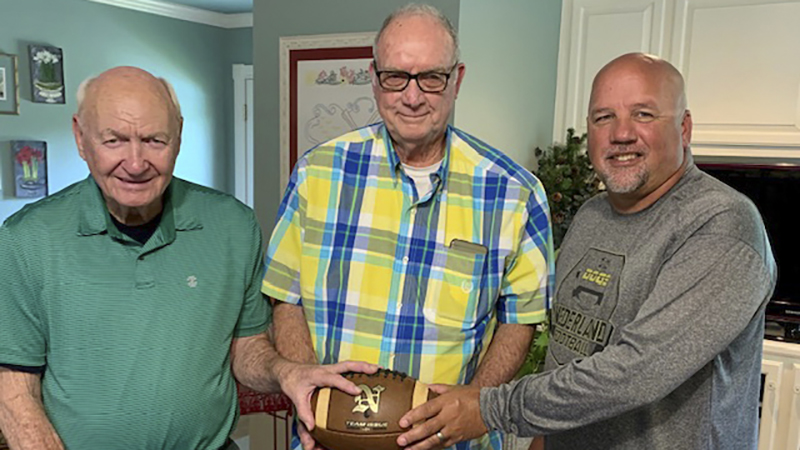 Ozamay (Junior) Pullin and Lidney Thompson, Nederland teammates in the early 1950s, were visiting their old hometown this week when they met up with a Bulldog who came along 30 years later, Coach Monte Barrow.

Pullin and Thompson, now 85 and 84, are hoping to return Aug. 1 for the 18th annual Morgan-Adkins old timers’ luncheon. Event spokesman Ronnie Vize said plans are proceeding for the gathering, while staying alert for COVID-19 restrictions.

Pullin laughingly labels himself “the worst quarterback Bum Phillips ever had.”

His senior season, 1952, Nederland managed to go 5-5, laying the groundwork for five straight district titles and the eventual state championship in 1957. Thompson was a strapping 6-foot-1, 170-pound end when he became the first Bulldog all-stater in 1953. 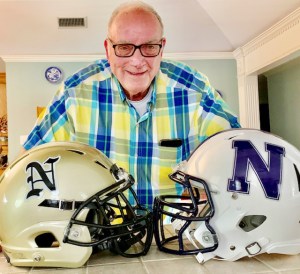 Lidney Thompson’s storied career as a player, administrator and coach began and ended in Nederland and Newton. He was the Bulldogs’ first all-stater in 1953 and coached in five state championship games in Newton. (Russ Devillier/Special to The News)

The careers of Thompson and Barrow provide stark contrasts in paths to success. Thompson made a myriad of stops while coaching in five state championship games for the Newton Eagles.

Barrow was an assistant for 24 years before succeeding Larry Neumann as head coach. He begins his fourth year at the helm when Nederland opens a new season Aug. 28 at West Orange-Stark.

Thompson played on the freshman team at the University of Houston, and lettered three years after one season as a redshirt. He coached football and boxing at the Harris County Boys Home for a year, got homesick and was hired on as a boilermarker helper at Neches Butane.

Thompson then returned to UH for a semester, finished his degree and began a three-year stint as an assistant at Groves Junior High.

The latter was as an assistant to son-in-law Tod Stark.

He was on Curtis Barbay’s staff when the Eagles won it all in 1998, blanking Daingerfield, 21-0. Nineteen years later, Thompson would again be on the sidelines when W.T. Johnston’s Eagle outfit beat Gunter in the 3A Division II finals. Newton repeated in 2018, edging Canadian. Last year’s team made it to the regionals.

Thompson and his wife Jackie have been married for 59 years. They have three daughters and six grandchildren. The old Bulldog stays in shape with regular two-mile walks at their home in Rayburn Country.

Pullin is a sprightly Cajun widower who now lives in Clinton, Tennessee, near his son Tommy. He makes the 830-mile trip to Nederland alone several times a years, visiting his sister Mary Kirkendall.

He was born in Groves, moved to Nederland in the ninth grade and married his sweetheart, Earlene Hooks.

They were together for 62 years before her passing in 2016.

Pullin recalls that their wedding at Hillcrest Baptist was attended by two carpenters who were working on the pastor’s adjacent home. He worked at Texaco before going to B.F. Goodrich in Port Neches and becoming a supervisor.