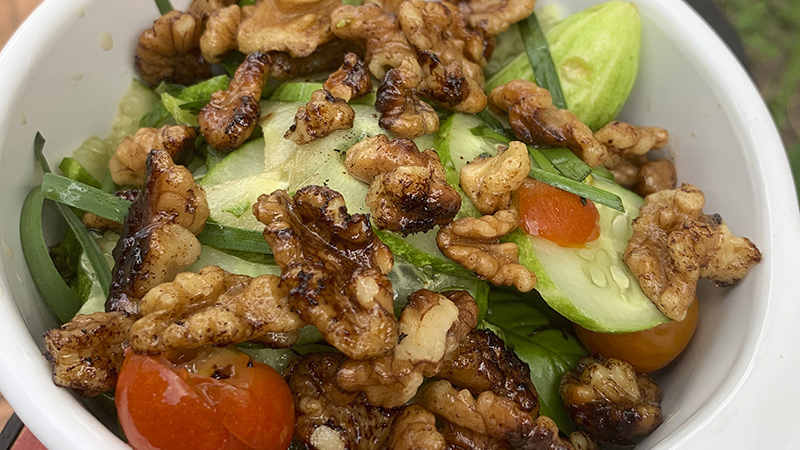 Jim & Dodie’s Big Adventure cucumbers have been dressed with everything from olive juice and blue cheese to toasted teriyaki walnuts. (Courtesy photo)

Considering I’m still staying “Safer at Home,” I had several adventures, including all the dishes I crafted from the English cucumbers of Jim & Dodie’s Big Adventure, featured here last week. (Find them on Facebook!) Simple vinaigrettes, creamy dressings and even a wasabi blend dressed these crisp beauties. One of my favorites was topped by walnuts that I toasted with a teriyaki glaze for even more crunch to the salad.

I just heard Monsignor Kelly Catholic High School has stations of the cross in a wooded area, so I took one of these salads with chicken to enjoy in a peaceful setting. It seems every mosquito there beat me to it so that was a quick walk.

A local foodie gave me another tip that God Grace African Market has opened at 6120 College Street in Beaumont, so I ran in there and left with spicy plantain chips, a loaf of sweet bread, a can of egglant and a bitter kola that I’m told will “clean out your insides.” Now that’s Culinary Thrill Seeking.

June is National Camping Month, so adventure continued with an indoor camping experiment with Dandies.

Creamy all-natural vanilla marshmallows sounds fancy, so how about giving them a name like Dandies. Okay, someone has already made and named these plant-based little pillows with real vanilla and vegan cane sugar. They appeal to gourmets, those who want to indulge and avoid several food allergies and all those little stuck-inside wanna-go campers of any age. If you’re pitching a tent in the living room and gazing up at the stars on charts, you can pop a batch of sheet-pan s’mores in the oven to give the family what many consider the best part of camping. Camping equals marshmallows, right? Hey, I softened some up in a little covered skillet set out in the sun and came back later to a heavenly warm and sticky treat. Go to dandies.com for more sophisticated Dandies ideas.

The Original PeachSkinSheets.com has a 20-point list of why you will also call them Softest. Sheets. Ever.

I’m gonna be like all those people who write rave reviews on how they want some on every bed. With moisture-wicking, thermal-controlled, easy-breath, pill-resistant hypoallergenic miracle sheets that really fit the mattress, I’d take more in Sage, The Real Teal and maybe an extra Eggplant top sheet to wrap myself in during TV time. This fall I may crave more in Pumpkin Spice. You can order swatches to feel for yourself and you will also become a PeachSkinSheets praiser. An unexpected extra wow is that the wrinkle-resistant softies don’t need a press for a smooth edge on the top sheet fold down. I have never been so excited to call it a night since these simply elegant sheets have gone down. They’re just sheets, people. But every extra is appreciated in detailing like the peach-colored packaging with a P-logo zipper pull. Bring it on.

Darragh Doiron is a Port Arthur area foodie ready to enjoy Southeast Texas and beyond. Reach her at darraghcastillo@icloud.com