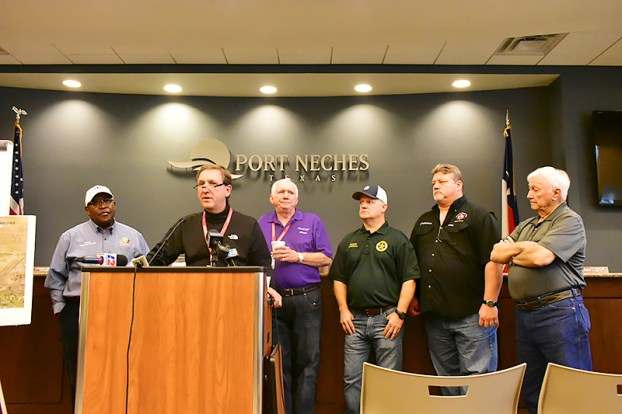 Those communities were within a 4-mile radius of the site of the TPC Group chemical explosions that occurred Wednesday. Branick said the fire has been contained, but civic and TPC officials could not offer a timeline as to when the fire will be fully extinguished. A train of smoke that had flowed southward shortly after the first explosion is now blowing to the north.

Both Port Neches Mayor Glenn Johnson and Branick warned the public to not approach the restricted area surrounding the TPC Group plant. The area is about a street block wide and does not contain residences.

“I’m not asking, I’m telling you: People, stay away,” Johnson said. “No lookie-loos. You don’t need to be coming down that area. You will be stopped and turned around. If you start driving down coming to see the area, then it’s making it tougher for our first responders to do the job they’re doing.”

A flight restriction of 2 miles within TPC is also in effect.

The inferno has been reduced to nine gas pressure fires in the Block 5 area, Branick said. No additional fuel is being added and none of the fires impend on any of the plant’s vessels, he added.

“We are now prepared to say that the fire is now in contain status,” Branick said. “Progress has been made in the last 12 hours, better than we had hoped. The fire is now isolated from Unit 10 processing unit and Block 5 sphere tank unit.”

Through thermal imagery and water vaporization, Branick said, no further explosions are expected to occur. The first explosion at 1 a.m. Wednesday sent a shockwave through much of Mid- and South County and into Orange County. A second explosion occurred at about 2 p.m. Wednesday, but the impact was not felt from as far away as the first.

“The initial fire of the vessel was due to a lack of fire water availability,” Branick said.

Water had been flowing from a rate of 35,000 gallons per minute Thursday, but is now down to 19,000 per minute, the judge added.

TPC stated the initial explosion occurred in the South Processing Unit at a tank with finished butadiene, none of which has been traced by handheld devices used by the Texas Commission on Environmental Quality. Troy Monk, the plant’s director of health, safety and security, said an exact cause for the explosion still has not been determined.

The city of Port Arthur sent its mobile response unit to assist with fire control efforts in Port Neches.

Port Arthur Mayor Thurman Bartie said while the city’s main concern was air quality, based on recent data from the TCEQ, “We are basically OK.”

Branick said the air quality in Jefferson County is much cleaner than any other area in the state, citing emission reductions from local plants by 77 percent within the last 15 years.

“All the air monitoring is going to continue,” Branick said. “We’ve had nothing above the threshold limit values that are established by federal and state guidelines. We’ve not had any exceedances that pose hazards to human health.”