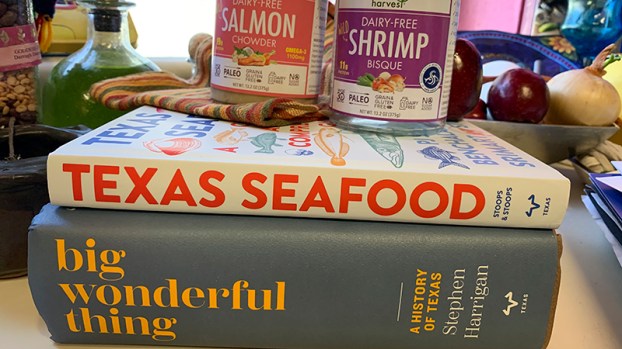 Texas books are full of information, and sometimes recipes. (Darragh Doiron/Special to The News)

Two Texas books merging into two seafood finds are in the news.

“Big Wonderful Thing” is Stephen Harrigan’s whopper history of Texas that everyone’s been talking about. You can get it for yourself for Christmas and still be enjoying it next year. Port Arthur has some mentions, including the Janis Joplin link. Do you like photos of young Lady Bird and diving just a little deeper into what you were taught in school? Get to reading this Texas-sized book.

“Texas Seafood Cookbook and Comprehensive Guide” — Maybe you’ve been wondering about fish tongue, or pepperweed’s radish-like bite, or more about that fish behind the Pompano Club. This is the book that will take you deep into the waters of what you’re eating and what you should have been eating on the fish. There’s recipes for the fish you already love, but honor the homely alligator gar by cooking him as a pot roast or consider that frog skin could create a superior crackling.

Fishmongers P.J. Stoops and Benchalak Srimart Stoops were chefs at Foreign Correspondent, a farm-to-table Thai eatery named Bon Appetit’s Best New Restaurant in 2015. Stoops was the driving force behind Total Catch Market, a program selling bycatch seafood from the Gulf in Houston. This book is both technical and humorous at once. You’ll learn a lot and then you’ll want to experiment a lot.

Safe Harvest, a SafeCatch brand, has released jars of seafood soups that will bring a delicate touch to your winter meals. Easy prep is what you need in this early-to-dark season and these soups will be ready for you with mild flavor that pairs well with crusty French bread and your best butter. Close your eyes and you could be in a restaurant with white linens instead of in your warm sweatshirt, cuddled up on the couch.

Some of this good stuff comes as clam chowder, salmon chowder and shrimp bisque and all are Whole30 and Paleo approved as well as grain, gluten and dairy-free.

It’s smooth and creamy. We Cajuns down here will have our sprinkle of cayenne ready for topping, just in case.

Darragh Doiron is a Port Arthur area foodie who thinks Texas lives up to all the hype. Reach he art darraghcastillo@icloud.com06