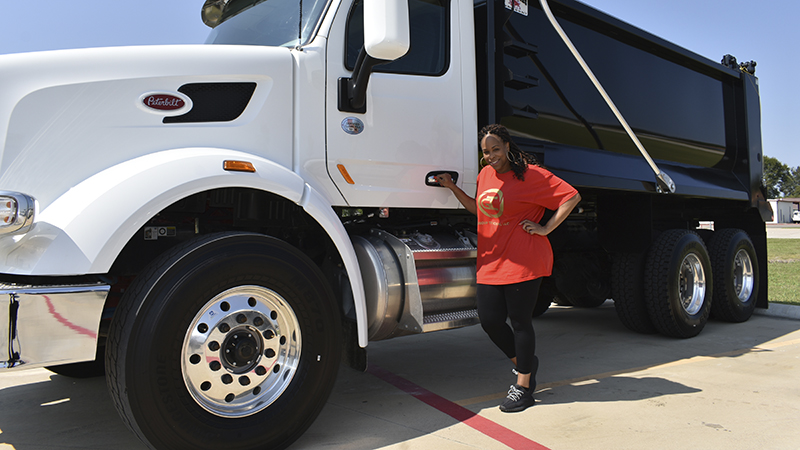 Texas Workforce Solutions of Southeast Texas was a busy site Thursday morning as more than 75 people came by for a job fair and an on-the-spot interview for dump truck drivers, diesel mechanical and trainers.

The business looking for employees is Group Trucking LLC, who, along with chief executive officer Yolanda C. Smith, made an inaugural appearance at Port Arthur City Hall earlier this week, announcing the need for workers and training opportunities.

Janice Wright, director of training, and Rodney Wright, chief operating officer, gave some input into the business that began in Haymarket, Va., with ties in Houston. Company officials are looking for permanent offices in Port Arthur as they work with local refineries. Their original agreement with industry is as a sub-contractor.

“We came down here to bring opportunity to southeast Texas,” Janice Wright said. “We understand this region has a 8.3 percent unemployment rate, the highest in the state of Texas. We’re interested. We want to bridge that gap.”

GTL has made connections with Lamar State College Port Arthur, which offers commercial drivers license court, or CDL, with plans to hire graduates of their program.

GTL will also provide training to individuals wanting to obtain their CDL as well as partnering with people wanting to be in administration and information technology.

The company is also looking at working with Memorial High School and Port Arthur Independent School District in a “pre-CDL” course and offer courses for people who don’t want to drive a truck and instead want to be a dispatcher or work with logistics.

Smith has met with Port Arthur Mayor Thurman “Bill” Bartie, saying the city is embracing the company with open arms.

“We will work closely with the city in bringing many jobs,” Smith said. “The goal is 100 jobs.”

Smith has been an entrepreneur for more than 21 years and has met a lot of people; one of those individuals was a truck driver who was very enthusiastic about the career and the income. This intrigued Smith. She did some research, looked into it and spent a-year-and-a-half on the road driving cross-country.

She said she’s had no problems in the male-dominated field of truck driving and learned to network with other women truckers, as well as men, in the industry.

A second job fair is set or 5 to 7 p.m. Oct. 10 at First Sixth Street Baptist Church in Port Arthur.

Smith plans to have additional job fairs on subsequent Thursdays.