CULINARY THRILL SEEKING — Whiskey Cake: As good as it sounds 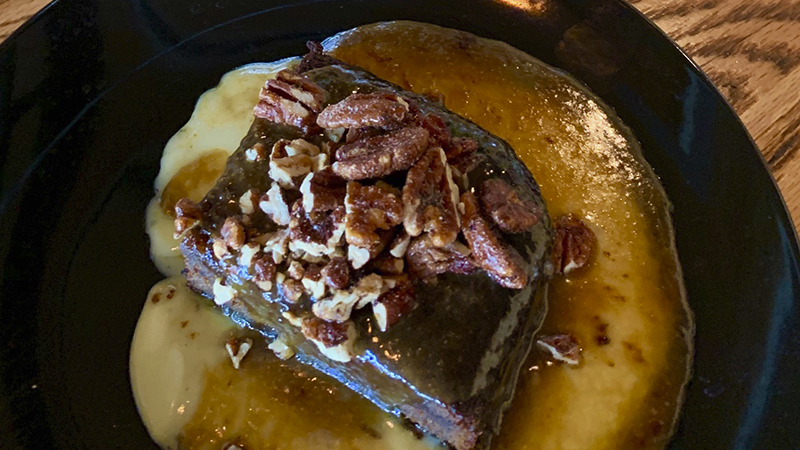 Cutline: Whiskey cake at “Whiskey Cake Kitchen and Bar” is made with layers of thoughtfulness and deliciousness. (Darragh Doiron/Special to The News)

“I’ll need a minute,” I told my husband and the signature dish in the Katy restaurant arrived at the table.

The server had asked if we wanted cream on top or on the side and ended up just leaving the container. We were at “Whiskey Cake Kitchen and Bar” at just the right slow time on a Monday afternoon.

Short ribs over spaghetti squash tasted lovely and everyone said the Brussels sprouts were famous. I never, ever thought I would like them but I would’ve tried them if I weren’t already decided on the other. Then came the whiskey cake.

I will call you out and say you should feel guilty if you eat a whole one by yourself. You could take it home and eat it for a couple days if you were really good. But I wasn’t necessarily that good. The cake here was made with layers and thoughtfulness of deliciousness. This is a chain restaurant, but the best kind.

Stuffed Puffs are marshmallows stuffed with real chocolate. So, did your mind just go to s’mores? Bingo. That was easy.

A Culinary Institute of America grad designed this scientific wonder that you can pick up at Walmart stores. Now, here’s my trick. I put one in a dish on the dashboard in Southeast Texas heat. That afternoon I had a super-sweet reward. The marshmallow and chocolate were melted to perfection, but the little plastic dish was flat!

Next time, I’m going with a deeper vessel, like on old-school coffee cup. Stuffed Puffs are easy to use around a campfire. This melty trick doesn’t even need a flame.

What’s cooking behind the doors of those iron-gated, columned Garden District homes you view from your New Orleans street car? It could be Zatarain’s boxed dinners. Hey, sometimes you want easy prep so you can head out to hear the jazz.

The beloved brand has released Garden District Kitchen boxed dinners with a flavor of the city’s Italian heritage. Parmesan Garlic features brown rice with white beans and Roasted Garlic Adobo is brown rice with black beans. It’s a little bit “different” and a lot of easy.

Ten minutes of cook time? Who could argue with that from a trusted brand?

While I did eat these hot off the stove, I’m imagining them served from a covered to-go bowl and mixed with sliced green onions and other vegetables. What a lovely dish for a summer’s evening picnic.

My husband called and said some “discs” had arrived for me to try. Huh?

They’re so easy to have for breakfast or a meal on the go, with less than 90 calories. New choices in their veggie cake line are Butternut Squash (my personal fave of the whole lot) and Broccoli Cheddar.

I’ve excited some of my veggie-loving friends with samples of these, which can be found at Kroger and Costco. If you think you don’t have the time to eat better, stock up on these.

Darragh Doiron is a Port Arthur area foodie ready to try anything new. Reach her at darraghcastillo@icloud.com