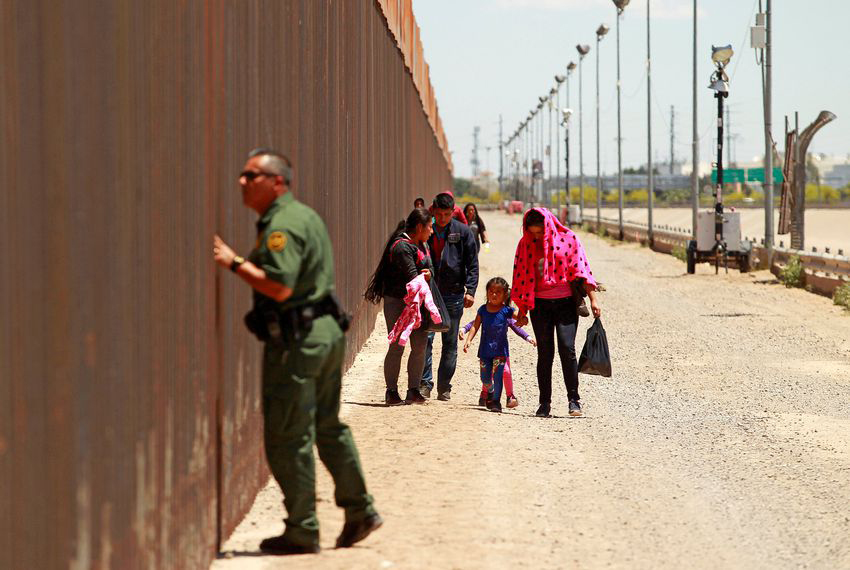 A group of migrants walks next to the U.S.-Mexico border fence after crossing the borderline while a Border Patrol agent looks through the fence in El Paso on May 15, 2019. (REUTERS/Jose Luis Gonzalez)

The surge of unauthorized migration that has the U.S. Border Patrol sounding alarm bells continues to rise to modern-day records, according to government statistics released Wednesday.

Across the southwest border, about 133,000 migrants were apprehended or surrendered to border agents on the southwest border in May, according to U.S. Customs and Border Protection. Approximately 11,400 more were deemed inadmissible at ports of entry. The total represents an increase of about 32% from April.

The El Paso and Rio Grande Valley areas continue to see the largest influx of migrants — the vast majority of whom were unaccompanied minors or families from Central America who are seeking asylum in the United States.

Meanwhile, the Del Rio area is becoming the latest hot spot for migrants; agents in that sector have also seen apprehensions increase by the thousands each month.

About 49,880 migrants crossed the border in the Rio Grande Valley, a 35% increase over April. Another 38,630 came through the El Paso sector, which also includes New Mexico — a 43% jump since April; and about 8,560 crossed in the Del Rio sector, representing a 46% increase.

From October, when the government’s fiscal year began, through the end of May, the number of migrant family-unit apprehensions in the El Paso sector increased by about 100,000 – about 2,100%, compared to the same time period during the 2018 fiscal year. In Del Rio, agents apprehended 15,600 more families from October to May compared to the same period in 2018, a spike of 1,034 percent.

The surge of migrants at the southern border has led President Donald Trump to issue his latest threat toward Mexico. Last week, Trump announced he would slap tariffs on all imports from Mexico as soon as next week unless the Mexican government halts the flow of migrants through its territory.

Border Patrol stations, which are designed to hold a relatively small number of people for short periods, have been overwhelmed and have been forced to construct temporary facilities to hold and process migrants. Last month agents unveiledmassive, 500-person tent facilities in El Paso and the Rio Grade Valley city of Donna to deal with the crush of migrants; about two weeks later Customs and Border Protection announced that they needed more space and planned to build even more facilities in the Rio Grande Valley.

On Tuesday, the agency announced it also has erected tents in Eagle Pass, part of the Del Rio sector, where overall apprehensions have increased by 200 percent this fiscal year.

Agents have also seen a significant number of undocumented immigrants traveling in large groups. Through the end of May, more than 180 groups of more than 100 people have been apprehended on the southwest border, according to a Border Patrol statement. That includes a group of more than 1,000 apprehended in El Paso last week. On Memorial Day alone, agents in the El Paso sector apprehended about 2,200 migrants, including groups of 200 and 430.