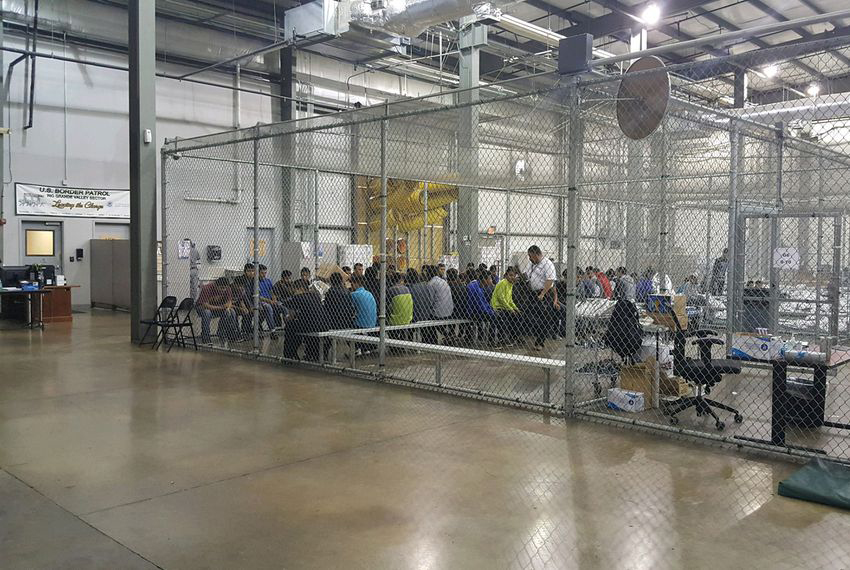 U.S. Border Patrol agents have quarantined nearly three dozen migrants who were being held at the agency’s main processing facility in McAllen, after they were found to be infected with the influenza virus, a U.S. Customs and Border Protection official said Wednesday.

To stop the spread of the flu, CBP temporarily halted operations at its Central Processing Center on Tuesday, a day after the death of 16-year-old Carlos Hernandez Vasquez, who had been detained at the facility and had tested positive for influenza.

The agency identified 32 migrants with influenza after a rigorous health screening of the detainee population, said the CBP official, who spoke on the condition of anonymity during a conference call with reporters.

The government agency tasked with policing America’s borders has warned repeatedly of crisis conditions on the southwest border, where Border Patrol agents are arresting and detaining a rapidly growing number of migrants. The agency says it does not have the capacity to care for the crush of migrants, which has overwhelmed nearly all aspects of the U.S. immigration system.

Nearly 45,000 of the migrants apprehended during the past six months have been unaccompanied children.

The McAllen processing center, a crowded warehouselike building where detainees are held behind fencing and sleep on mats, is among the busiest facilities along the southern border.

Between the center and an adjacent, temporary “soft-sided” shelter, the facility currently holds approximately 2,500 people, the CBP official said.

Carlos had been held at the McAllen processing center for nearly a week, at which point he was diagnosed with the flu. He was prescribed medication and Border Patrol officials moved him to another facility, where he could be isolated from the rest of the detainee population.

He died shortly afterward, the fifth Guatemalan child since December to die after being detained at the border, and at least the second to have contracted a strain of the flu.

The CBP official was unable to say how many of the 32 newly identified flu cases involved children.

“We are often encountering a population that is often ill,” the CBP official said Wednesday. “We’re making 69 trips a day to the hospital.”

Efforts to find more space for people to sleep, and to isolate the sick when necessary, means that shuffling detainees between Border Patrol facilities “more or less has become standard practice,” the official added.

Kevin McAleenan, the acting homeland security secretary, acknowledged in March that CBP was seeing seriously ill migrants coming into its custody. Some have had the chickenpox or the flu, and infants have had fevers as high as 105 degrees.

“We are doing everything we can to simply avoid a tragedy in a CBP facility,” McAleenan said in March while speaking in El Paso, describing the U.S. immigration system as reaching its “breaking point.” “But with these numbers, with the types of illnesses we’re seeing at the border, I fear that it’s just a matter of time.”

All Border Patrol agents are trained in emergency first aid — a skill often needed in isolated stretches of the border where agents encounter migrants at risk of drowning, dehydration or other hazards.

But CBP employs an outside contractor to provide medical assessments and basic medical services to its detainees, including initial health screenings upon arrival.

“We are not trained to do those things on our own,” the official said. “We follow their guidance and transport those individuals” to the hospital when needed.

The migrants deaths have raised concerns from immigration advocacy groups and Democratic lawmakers.

“When we read of individual deaths, we see them as isolated cases. But clearly, we have a huge systemic problem,” Erika Andiola, the chief advocacy officer at ­RAICES, an immigrant advocacy group, said in a statement. “Children dying in U.S. custody is a national emergency and should be treated as such.”

CBP is required by law to transfer unaccompanied migrant children to the Department of Health and Human Services custody within 72 hours of apprehension, except under exigent circumstances.

Last month, immigration authorities detained 109,144 migrants along the U. S-Mexico border, the most in a single month since 2007. More than 60 percent were families or children.

Tents have been set up in Border Patrol parking lots to alleviate the overcrowding. CBP this month also began boarding some new arrivals onto airplanes to jet them to less crowded facilities.