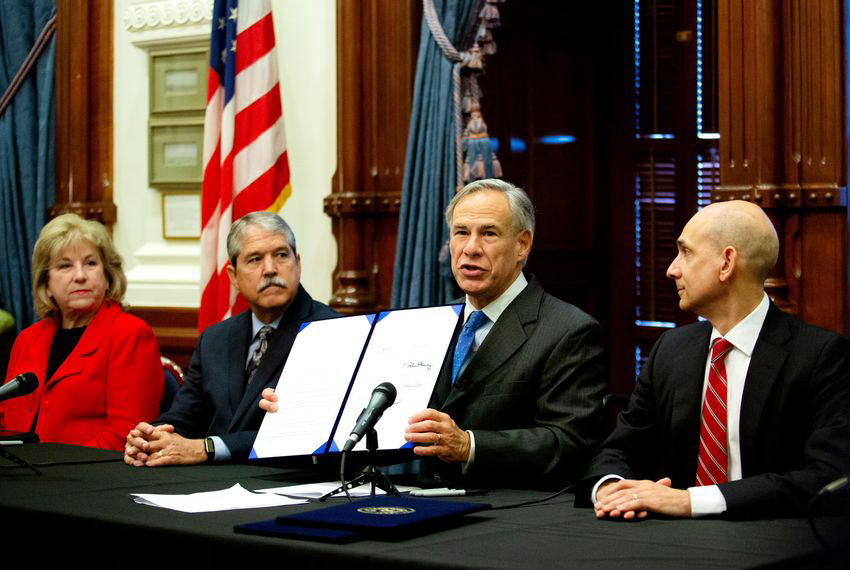 Capping off a yearslong effort to prevent another school shooting like the Santa Fe High tragedy, Gov. Greg Abbott signed a series of bills into law Thursday that would, among other things, strengthen mental health initiatives available to children and allot money to school districts that can go toward “hardening” their campuses.

The bill is, in part, a product of Abbott convening lawmakers soon after last May’s shooting at Santa Fe High, which left 10 dead and another 13 wounded. Before signing the measure Thursday at the Texas Capitol, Abbott said that SB 11’s passage was made possible through the efforts of House and Senate lawmakers and fruitful discussions that came out of a series of roundtable discussions he hosted shortly after the shooting.

The legislation addresses “not only the tragedy that took place at Santa Fe,” Abbott said at Thursday, “but will do more than Texas has ever done to make schools safer places for our students, for our educators, for our parents and families.”

Republican state Sen. Larry Taylor and state Rep. Greg Bonnen — who both represent the Santa Fe school district — said they were pleased with lawmakers’ headway this session as it relates to school safety and mental health initiatives.

“It is unfortunate that the events such as what happened at Santa Fe occurred, but we are taking action to do everything that we can reasonably do,” Bonnen said.

“We are taking a very significant step forward,” Price said of his legislation. “We’re reducing the stigma that is associated with mental illness, and we’re equipping our counselors, administrators and educators throughout the state of Texas to identify children in crisis — again, all with parental consent.”

While both the mental health and omnibus school safety measures garnered bipartisan support in the House and Senate, their success came as a number of other school safety bills drew heavy criticism from Democrats and gun control advocates. The third bill Abbott signed into law Thursday abolishes the cap on how many trained school teachers and support staff — known as school marshals — can carry guns on public school campuses.

The signing of that bill disrupted the harmony between Texas Republicans and gun control proponents who, otherwise pleased with the bill signings, lamented that the marshal bill passed and another “red flag” law measure — which would have allowed courts to order the seizure of guns from people who are deemed an imminent threat — never gained traction at the Capitol.

“I think ultimately that’s going to be something we need,” said Ed Scruggs, vice chair for Texas Gun Sense. “In most cases there are signs. There are threats that are made or social media posts — something is occurring that’s tipping people off that we could have a problem here.”

Asked by reporters Thursday whether he supports “red flag” laws, Abbott said that “right now” such a measure wasn’t necessary in Texas — though he asked lawmakersto consider the idea shortly after the shooting. “We think the best approach is what we passed in the combination of these bills,” the governor said.

Still, Scruggs gave a thumbs-up to lawmakers for their progress on school safety bills and said that “overall, things were positive.”

Gun control groups like Scruggs’ weren’t the only ones to laud Texas’ leadership for their work this session to help prevent — or at least mitigate — another mass shooting. Survivors, too, said lawmakers surpassed their expectations as it related to making progress on school safety legislation this year.

“We were really pleased with SB 11. The pieces that were personal to me are in there,” said Flo Rice, a former Santa Fe High substitute teacher who was shot in both legs last May. “I’m really pleased. I feel like they worked very hard, they listened to us and the community and made strides to really protect our children.”