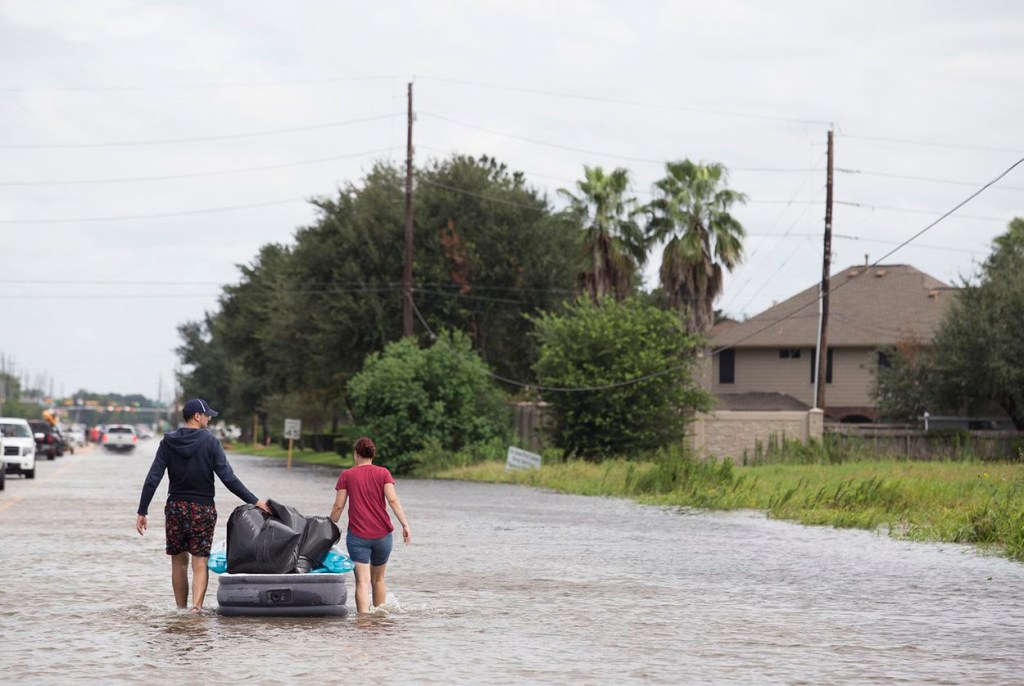 Jeremy Boutor removes personal items on an air mattress from his home in a neighborhood along Eldridge Parkway, flooded by waters released from Addicks Reservoir on Wednesday, Aug. 30, 2017, adding to flooding from Hurricane Harvey. (Michael Stravato for The Texas Tribune)

WASHINGTON – The U.S. House of Representatives passed a major disaster relief bill Monday evening, concluding a series of dramatic delays in Congress and sending the legislation to the desk of President Trump.

The $19.1 billion bill, which Trump is expected to sign, would allocate funding to nine disaster-affected states and two territories, and also release more than $4 billion to Texas that Congress allocated more than a year ago in the aftermath of Hurricane Harvey. After meeting unexpected resistance in the House that stalled the vote for 11 days, the bill at last broke through Monday by an overwhelming, bipartisan margin of 354-58.

The bill passed in the U.S. Senate just before the Memorial Day recess but hit an obstacle when it reached the House floor. Most members had already left Washington for the holiday. Backers of the legislation had hoped to push it through on a voice vote before the recess. These efforts were thwarted by U.S. Rep. Chip Roy, an Austin Republican, who drew national attention for his blocking of the vote by using a procedural objection. Two other conservative House members later made similar objections, ensuring that Congress couldn’t send the bill to Trump until after the recess.

The resistance in the House appeared to come as a surprise to Senate Republicans, including Texan John Cornyn, whose contributions were instrumental in breaking the Senate logjam and applying pressure on the White House to take swift action. A key provision of the bill is a White House “shot clock,” implemented by Cornyn, which would require the Office of Management and Budget to release more than $4 billion in disaster aid owed to Texas within a 90-day window.

Given the bipartisan support for natural disaster relief, securing relief funding has proved surprisingly difficult in recent years. The new bill was pushed through Congress only after the Trump administration dropped demands that the package exclude disaster aid for Puerto Rico and include allocations for the Department of Homeland Security to address the migrant crisis at the border.

And for Texas, the forestalled success of the new bill caps a prolonged struggle by the state’s delegation to secure aid promised over a year ago. After Congress approved more than $16 billion in disaster relief funds in early 2018, efforts by Texas representatives to secure the state’s share have been frustrated by bureaucratic hurdles in OMB and the U.S. Department of Housing and Urban Development. Most recently, U.S. Rep. Lizzie Pannill Fletcher, a Houston Democrat, and U.S. Rep. Randy Weber, a Friendswood Republican, introduced a bill with similar language to Cornyn’s provision demanding that HUD release the long overdue $4 billion to Houston-area districts still recovering from Hurricane Harvey.

Local advocates for communities still recovering from Hurricane Harvey expressed frustration at yet another delay in the federal funds. Hurricane season started on June 1 and coastal communities in Texas are already seeing flooding amid strong recent storms.

Even with the addition of Cornyn’s “shot clock,” the wait for disaster relief funding will continue. If President Trump signs the bill immediately, OMB will not have to release its funding until late summer, after the worst of hurricane season has already passed.