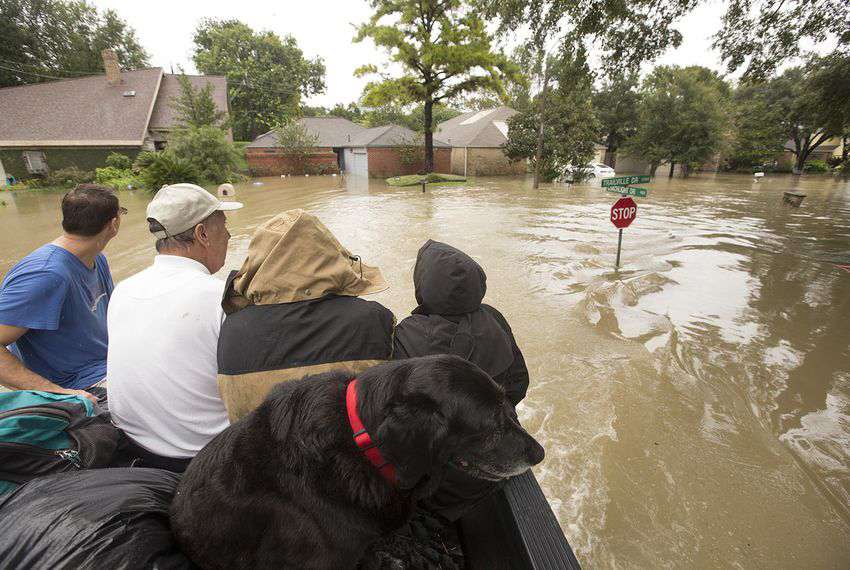 A load of Harvey evacuees in the back of Chris Ginter’s monster truck in Houston on Aug. 29, 2017. Ginter volunteered to evacuate residents from their flooded neighborhood near Buffalo Bayou. (Michael Stravato for The Texas Tribune)

WASHINGTON – The U.S. Senate passed a disaster relief bill on Thursday that could potentially force the Trump administration to release over $4 billion in disaster funding owed to Texas.

After months of stalemate with the Trump administration, congressional leaders struck a deal with President Trump on Thursday to spend over $19 billion on disaster funding in nine states and two territories. The bill moved swiftly through the chamber and passed by an overwhelming, bipartisan margin: 85-8. Both of Texas’ senators, Republicans John Cornyn and Ted Cruz, backed the bill.

The breakthrough of the negotiations came when Trump dropped his demands that the disaster aid exclude funding for Puerto Rico and include funding for the Department of Homeland Security to address the migrant crisis on the border.

For Texas, the bill addresses a situation the state’s delegation has been working for over a year to resolve. In early 2018, Congress approved $16 billion in disaster funding for various areas impacted by disasters, including more than $4 billion to Texas to address damage from Hurricane Harvey and prevent future damage on the scale of that 2017 storm. Since then, Texas and other communities have been unable to access those funds, waiting for the U.S. Department of Housing and Urban Development and the Office of Management and Budget to set guidelines for use of the grant funds.

The bill that the U.S. Senate passed Thursday includes a provision authored by Cornyn that would force the Trump administration to release that earlier funding within 90 days of the bill becoming law.

The U.S House left town earlier on Thursday for the Memorial Day recess, but the legislation could be fast-tracked through that chamber in the interim through a voice vote.