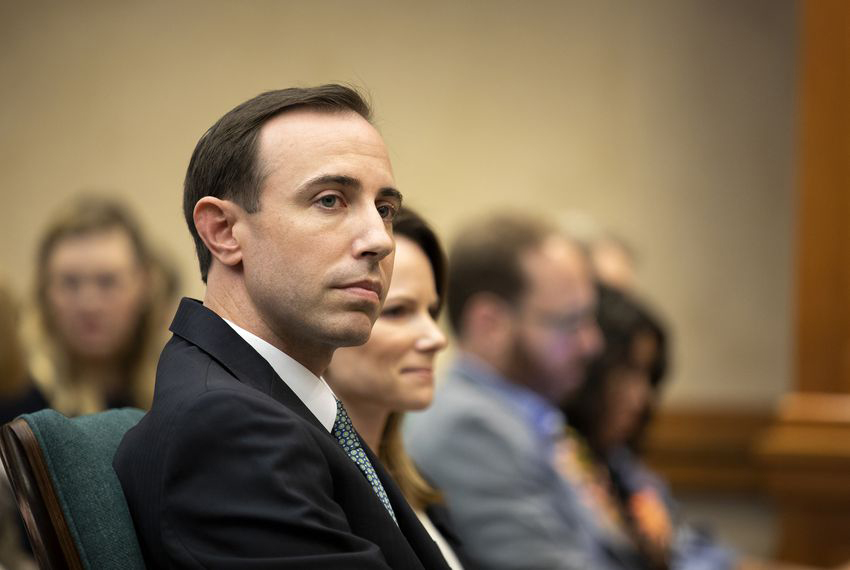 Texas Secretary of State David Whitley at a state Senate Committee on Nominations hearing on Feb. 7, 2019. Whitley was appointed to the job by Gov. Greg Abbott, but Whitley must first clear the committee, then win a two-thirds vote in the full Texas Senate. (Miguel Gutierrez Jr. / The Texas Tribune)

Former Secretary of State David Whitley — who lost his job after presiding over a botched review of the citizenship of Texans on the voter rolls — is back to working at the governor’s office.

Whitley resigned from the post Monday just before he would have been kicked out of office without a state Senate confirmation vote, but he went straight back to Gov. Greg Abbott’s office where he was rehired on a $205,000 annual salary, according to the state comptroller’s office.

Whitley’s return to the governor’s office was first reported by The Dallas Morning News.

A longtime aide to the governor, Whitley left that office in mid-December when Abbott appointed him to serve as secretary of state. But his tenure was cut short after Democratic senators blocked his confirmation over a bungled effort to review the voter rolls for noncitizens that instead jeopardized the voting rights of tens of thousands of naturalized citizens.

A federal judge halted that review in late February over concerns that “perfectly legal naturalized Americans” were targeted in ways those born in the country were not. Whitley’s office eventually agreed to scrap the review to end the three federal lawsuits that were filed against the state. But the debacle left taxpayers on the hook for $450,000 in costs and attorney fees for the lawyers of the naturalized citizens and civil rights groups that alleged the review was unconstitutional and violated federal protections for voters of color.

The settlement did little to assuage Democratic senators who came out against his confirmation as early as February, echoed by dozens of civil rights and advocacy groups and the Texas Democratic Party. The Democrats held their block despite intense efforts by the governor to secure enough votes before time ran out on Whitley’s appointment.

“Let’s get this straight: David Whitley used taxpayer dollars to attack Texans’ right to vote,” Texas Democratic Party executive director Manny Garcia said in a statement Friday. “Texans and the Texas Legislature said he had no business sitting in the Secretary of State office. He definitely has no business continuing to draw a six-figure salary on the taxpayer dime in the governor’s office.”