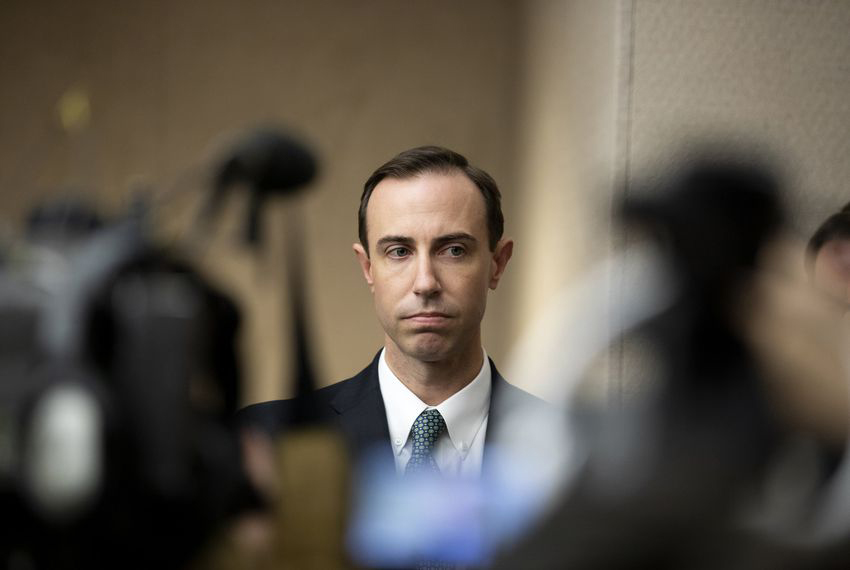 Secretary of State David Whitley departs after his office flagged about 98,000 voters for citizenship checks — 25,000 of them in error and many more likely because they were naturalized citizens. (Miguel Gutierrez Jr. / The Texas Tribune)

The ill-fated tenure of Texas Secretary of State David Whitley has come to an end.

The Texas Senate gaveled out Monday without confirming the state’s top election official, who served for less than half a year and whose tenure was mired in controversy over a failed attempt to scour the voter rolls for noncitizens — a review that questioned the citizenship of thousands of legitimate voters.

But minutes before that happened, the Austin American-Statesman reported that Whitley had submitted his resignation. The secretary of state is constitutionally required to leave office immediately if the Senate goes through an entire legislative session without confirming him.

His departure is an unusual end; gubernatorial appointees typically sail through the Senate.

Whitley, a former top aide to Gov. Greg Abbott, departs after his office flagged about 98,000 voters for citizenship checks — 25,000 of them in error and many more likely because they were naturalized citizens.

First appointed in mid-December, Whitley oversaw the botched review that pulled the state into three federal lawsuits, prompted a congressional investigation over concerns of voting rights violations and frayed the relationship between the state’s election office and the local officials it depends on to run elections.

In the end, the review caused more problems for the state than it solved, fueling doubts about the unsupported claims of rampant voter fraud it sought to address. And it stoked deep partisan scars in a Legislature with a long history of suppressing the rights of voters of color.

Senate Republicans were short on votes to confirm Whitley without any Democratic support. Although they are a political minority in the chamber, the Democrats’ block held firm throughout the legislative session in impeding the confirmation of a chief elections officer who needed two-thirds support of the Senate to keep his job.

All 12 Democratic senators went on the record as “nays” on Whitley’s confirmation in February, citing concerns over the fear the review had caused among legitimate voters who were not born in the U.S. and who are more likely to be people of color. During the review, some of those individuals received letters demanding they prove their citizenship to avoid being kicked off the rolls.

“The reality is that Democrats showed solidarity on that issue because of Whitley’s position of voter suppression,” state Sen. Royce West, D-Dallas, told reporters after the Senate adjourned. “That was the issue.

Throughout the debacle, Whitley and other state officials repeatedly defended the review as a legitimate effort to improve the integrity of the state’s voter rolls. But it was riddled with errors.

After tagging the roughly 98,000 voters for review, the secretary of state’s office quietly acknowledged almost a quarter of the names were mistakenly included. Local election officials said they were able to identify more than 1,000 other naturalized citizens on their lists before a federal judge halted their reviews. Weeks later, the secretary of state inadvertently sent additional names for review to certain counties because of a technical error a spokesman blamed on a vendor.

State officials eventually agreed to give up on the review as part of a legal settlement to shut down the litigation the state faced. That left taxpayers on the hook for $450,000 in costs and attorney fees for the lawyers of the naturalized citizens and civil rights groups that alleged the review was unconstitutional and violated federal protections for voters of color. A federal judge appeared to have similar misgivings in late February when he put the review on hold over concerns that “perfectly legal naturalized Americans” were targeted in ways those born in the country were not.

Still, Abbott appeared to hold out hope on the nomination through the final hours.

“We’ll need to wait and see how today turns out,” Abbott told reporters at an unrelated news conference Monday morning in Austin, less than an hour before the Senate was set to meet for the last time this session.

It’s unclear how quickly Abbott will move to fill Whitley’s post. The constitution states the governor shall “without delay” make another nomination to fill the vacant post. The governor’s office did not immediately respond to a request for comment Monday.

Patrick Svitek contributed to this report.

Disclosure: The Texas secretary of state’s office has been a financial supporter of The Texas Tribune, a nonprofit, nonpartisan news organization that is funded in part by donations from members, foundations and corporate sponsors. Financial supporters play no role in the Tribune’s journalism.