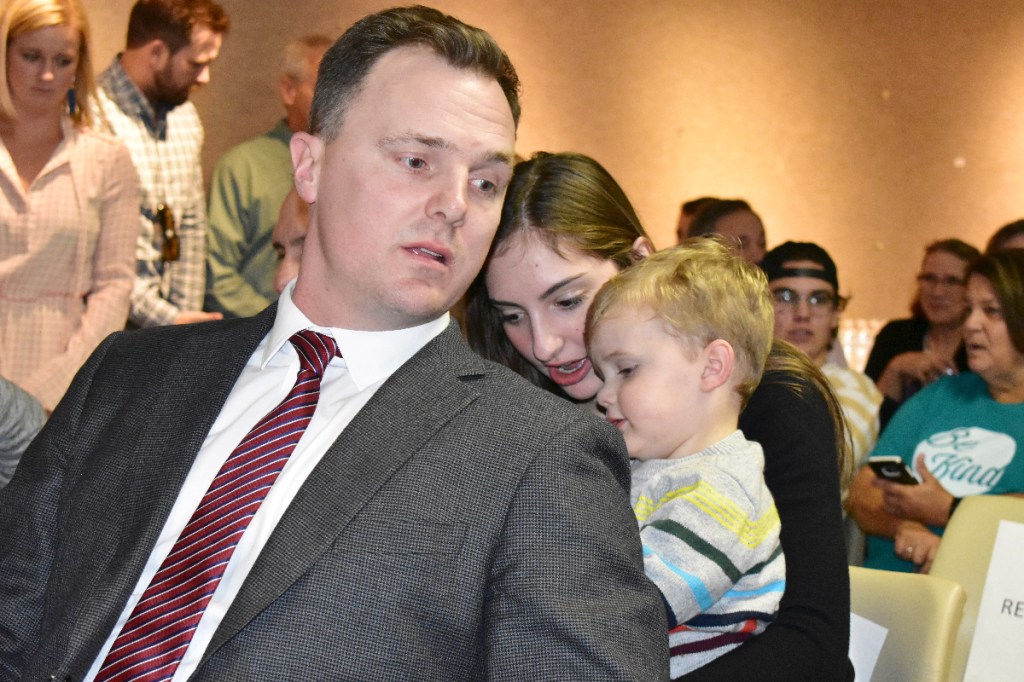 Then-Seattle Mariners outfielder Jay Bruce, originally of Beaumont, listens to his son Carter, 2, before his induction into the Museum of the Gulf Coast Sports Hall of Fame on Jan. 5, 2019. (I.C. Murrell/The News)

The Philadelphia Phillies on Sunday made official the acquisition of Beaumont native Jay Bruce from the Seattle Mariners, 14 home runs into the season.

Bruce is going from a last-place team in the American League West Division to the top team in the National League East. He was traded for minor-league third baseman Jake Scheiner, and the Phillies will also receive cash considerations as part of the deal. According to MLB.com and the Associated Press, Seattle is sending Philly more than $18.5 million of the remaining $21.3 million on Bruce’s three-year contract from the New York Mets in 2018.

“I get to go somewhere I have a chance to win, and at this point in my career, that’s pretty paramount for me,” Bruce told the Phillies’ MLB website. “Obviously I’ve spent most of my career in the National League and multiple years in the NL East. I look forward to going over there and helping the Phillies hopefully win a championship. That’s my goal. I just want to win.”

Bruce will appear with the Phillies at San Diego on Monday. Philly was 33-26, one game ahead of Atlanta for first place in the NL East as of 7 p.m. Sunday.

Seattle was 25-37, 15.5 games behind Houston in the AL West, at that time. Houston swept a three-game series in Seattle in April and will visit Seattle again in the start of another set starting Monday night.

Bruce, 32, a 2005 West Brook High School graduate, has 14 home runs on the season, seven behind major-league leader Christian Yelich of the Milwaukee Brewers. His career high is 36, split between Cincinnati and the New York Mets in 2016.

The three-time All-Star spent 2008 through part of 2016 with the Reds, who drafted him 12th overall out of high school. He went from the Mets to Cleveland in 2017 and then back to the Mets in 2018 before the Mariners struck a deal going into this season.

He was inducted into the Museum of the Gulf Coast Sports Hall of Fame in January.