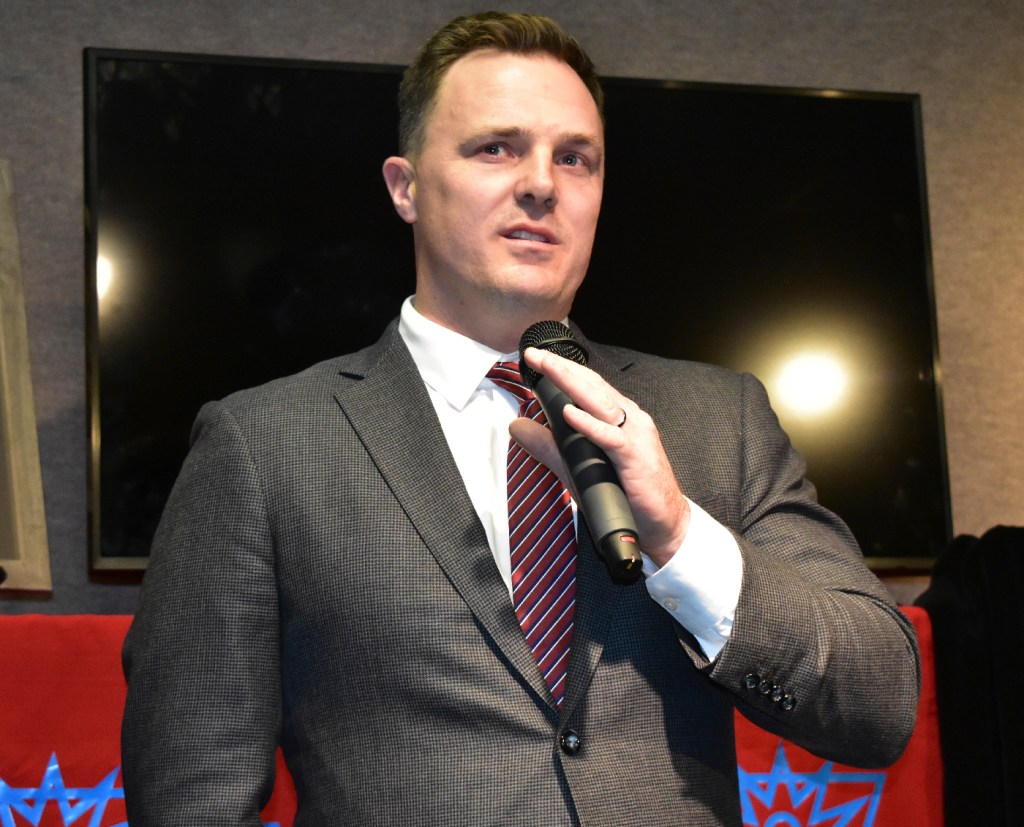 Seattle Mariners outfielder Jay Bruce, originally of Beaumont, speaks during his induction into the Museum of the Gulf Coast Sports Hall of Fame on Saturday. (I.C. Murrell/The News)

Her eyes welled with tears, Martha Bruce reacted to some of her son Jay’s highlights during his 11-year major-league ballpark.

“I will go home, I will watch … when baseball season’s not on, I’ll go to YouTube and I’ll watch all his [highlights],” she said. “I still watch it. It never gets old.”

What made this viewing more emotional was that the highlights were shown at Jay’s induction into the Museum of the Gulf Coast’s Sports Hall of Fame.

Almost 14 years ago, Jay Bruce was a fresh-faced kid from West Brook High School who was drafted 12th overall by the Cincinnati Reds. These days, the 31-year-old is a three-time All-Star and two-time Silver Slugger award winner who last month was acquired by the Seattle Mariners.

Bruce, too, was choked up Saturday, as he established another permanent home in Jefferson County.

“When a kid has a dream that seems crazy, he or she is told to temper them a little bit, to bridle them,” Bruce said. “ ‘Well, I don’t know about that. I don’t know if you can do that.’ They’re told to dream but only dream so much. And honestly, in my experience and in my life, I’ve been surrounded by a group of people who told me the opposite.

Bruce became the third inductee into the sports hall in the past two months. Fellow Beaumonter Kendrick Perkins, who recently retired from the NBA, and late Port Arthur high school and college basketball standout Earl Evans were inducted Dec. 8.

“To be in with names like that and people like that, it’s very important,” said Bruce, who still has a home in Beaumont. “This is very important. [Beaumont] is my hometown. Southeast Texas is where I was born and raised and where I will raise my family. So, it’s something I am definitely proud of.”

Bruce is married to his high school sweetheart Hannah, a 2005 Hamshire-Fannett graduate. Hannah said she couldn’t imagine 14 years ago the superstar status her husband has attained.

“I actually was very confused as to why he would choose to go as a senior in high school and not go to college,” said Hannah, who attended the University of Houston. Jay committed to Tulane in New Orleans out of high school, but forewent that scholarship.

“That was hard for me to accept at first,” Hannah said. “Obviously, it worked out. The situation was great. But initially that was my reaction — not college first?”

Jay’s minor-league career took him from Sarasota, Florida, to Billings, Montana, to Dayton, Ohio, back to Sarasota, then Chattanooga, Tennessee, and Louisville, Kentucky, where he was named minor-league player of the year in 2007. He made his major-league debut on May 27, 2008, against the Pittsburgh Pirates and went 3 for 3 with two runs batted in and a stolen base.

Bruce continued to make an early impact with the Reds and earned a feature in an issue of Sports Illustrated that July.

Jay Bruce is looking forward to what he calls “the new chapter” with the Mariners, who went 89-73 last season under third-year manager Scott Servais. He was traded there along with four others Dec. 3 from the New York Mets for Robinson Cano, Edwin Diaz and cash considerations. Bruce is in the second of a three-year deal worth $39 million.

“It’s a great city with a great fanbase,” Bruce said of Seattle. “It’s a lot of history there. My idol growing up was Ken Griffey Jr., and he played there, obviously (as well as in Cincinnati, where Bruce spent most of his first nine major-league seasons).

His biggest goal there is to help the Mariners win their first AL championship and then a World Series title. Seattle last reached the playoffs in 2001, when it reached the AL championship series following a 116-46 season but lost in five games to the New York Yankees.

“For me, I’ve had a lot of personal accomplishments that I am proud of,” Bruce said. “But now, honestly, I just want to be healthy and play well for my team.”

Martha Bruce, who still lives in Beaumont as well, said she’d much rather stay at home to watch Jay play rather than go to the game, although Jay has now joined a team that will face the Houston Astros in four AL West series this year. Houston will host Seattle, Aug. 2-4.

“I can go whenever I want to go; I just prefer home,” she said. “Now, when he plays Houston, I’ll be there.”