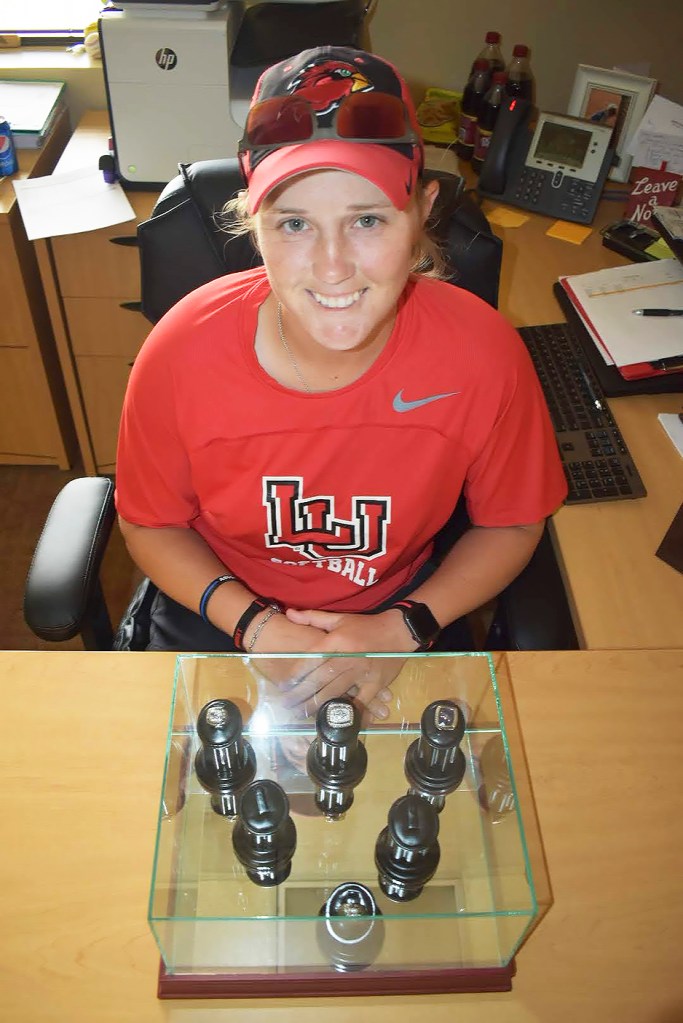 BEAUMONT — When Lamar University announced Amy Hooks as its new softball coach last year, the lady she succeeded and her wife had just started a legal fight with the school that has not yet been resolved.

An hour after the announcement, Hooks said, she made phone calls to her potential returning players. Some appeared in 60th District Court with fired head coach Holly Bruder and her wife-slash-assistant coach Allison Honkofsky to offer their support. Some sided against the couple.

“I needed to bring that family back together that was kind of in pieces, a little bit,” Hooks, the 30-year-old former University of Texas player, said. “I let them voice their opinion on the matter. I didn’t have a dog in the fight, so I didn’t care one way or another.”

Once the players made their voices heard, Hooks asked those who wanted to remain on the team to “flip the page” from the controversy and “fight for the university that’s across your chest.” Only two players from the 2018 team left the program.

Lamar finished the 2019 season with a 23-34 record, five fewer wins and six more losses than the year before, but qualified for the Southland Conference tournament with a 14-13 league mark as the No. 7 seed after missing the postseason in 2018 with an 11-16 Southland mark (ninth place). The 2016 and 2017 Lamar teams reached the championship round of the Southland tournament but finished second, with the 2017 team making the final round of the National Invitational Softball Championship, the sport’s answer to basketball’s National Invitation Tournament.

Bruder, the Cardinals’ head coach since the program was relaunched for the 2013 season following a 24-year hiatus, and Honkofsky were fired May 11, 2018, after both refused to resign. Bruder was placed on administrative leave on April 27, 2018, after then-catcher Paige Holmes alleged that Bruder violated her civil rights during a March 9, 2018, road trip by having a member of Bruder’s staff force her to eat a sandwich with meat during Lent. Holmes is Catholic and gave up bread for Lent and, according to her faith, could not eat meat on Fridays. Holmes has since left the team.

A request for a temporary restraining order to at least keep Bruder and Honkofsky on the payroll was denied Nov. 16, 2018. It was not clear if the couple sought to reclaim their coaching positions with Hooks already hired.

Attempts to reach Cade Bernsen, a lawyer representing Bruder and Honkofsky, and Lamar athletic director Marco Born for comment concerning the legal matter were unsuccessful. Assistant Attorney General Andrea Batista, representing Lamar, said in a June 12, 2018, article when a temporary restraining order was granted that such was not necessary because no further action was needed following Bruder’s firing.

Bruder’s LinkedIn account indicates she has been a recruiting specialist at Next College Student Athlete since March 2019 and FedEx operations manager from September 2018 to February 2019. The location for both jobs is listed as Baltimore.

Honkofsky’s LinkedIn account indicates she has been lead softball instructor at Top Gun Training Academy in the Baltimore area since August 2018.

None of the full-time coaches from 2018 were retained.

Meanwhile, Hooks was acclimating new recruits and returning players for the 2019 season. Her first Lamar roster included nine freshmen, two of them who redshirted, or sat out, in 2018, a sophomore, six juniors and five seniors.

Nederland native Savana Guidry, who completed her college softball eligibility and will graduate from Lamar next May, said Hooks created a positive environment.

“She created a fun, enjoyable environment,” said Guidry, who finished second on the team in batting with a .298 average. “There was not a day we came in and thought it was not going to be fun after a loss. She was fun, encouraging and loose. Not a lot of pressure.”

Guidry believes about Bruder’s and Honkofsky’s firing and legal issue that things happen for a reason. She figured it was hard for Hooks to come into a program not knowing if players would buy into her process toward winning a championship.

“We couldn’t dwell on the past,” she said. “I’m pretty neutral. Whoever my coach is, I respect them. I don’t have any beef. I think everything happens for a reason. Good luck to everyone, whatever happens to them. I keep to myself with the whole situation.”

Hooks said Born was straightforward with her about the coaching vacancy when she was hired and has been very supportive of her. She did not shy away from fans’ questions concerning the controversy throughout the season.

“A lot of fans would ask me, ‘Hey, how are you dealing with that?’ I would say, ‘Well, actually, y’all are more concerned about it than this team is,’” Hooks said. “We’ve turned the page and they want to play softball and they want to win. No matter if they loved the decision or hated the decision, they’re still here.”

Hooks has excelled in the battle of time management as a first-year head coach. Not only did she manage to assemble a sizeable recruiting class and her own coaching staff, she recently earned a master’s degree in student affairs and higher education from Southland Conference foe Northwestern State University of Louisiana, where she was previously assistant coach.

Hooks, who is considering an administrative career in higher education after her coaching days, interned under Lamar athletic department senior woman administrator Helene Thill during the past school year. Hooks’ goal is to bridge a gap between student-athletes and regular students.

“I don’t athletics to be here and regular students to be over here,” Hooks said. “I want it to be one and bridge that gap where students aren’t saying, athletes have all these benefits and what not, and athletes are going back to students: ‘Aw, you all don’t understand our schedule.’ There are regular students who have to maintain a full-time job and provide for themselves. Both sides have their argument points.’”

Guidry takes away from her only season under Hooks a stronger sense of leadership in a program.

“I think she helped me become the leader I needed to be,” Guidry said. “She told me she believed in me. She made me realize the player I could be. I was able to use all my tools in my toolbox. I could be goofy and funny and also be the serious, ready-to-go player whenever I needed.”

Information from The News staff reporter Chris Moore was used in this article.