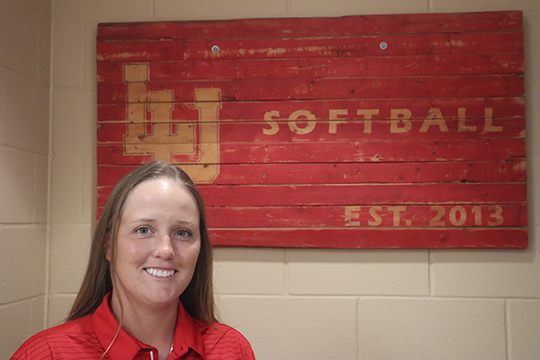 BEAUMONT — The Lamar softball program is trying to move forward while a legal battle continues between the university and former head coach Holly Bruder.

“The big thing for me was getting someone that had a connection to the state of Texas,” Athletic Director Marco Born said. “I tell all of my coaches that in this part of the country there is so much talent. We shouldn’t have to leave this part of the country to recruit good players in all of our sports. She played at Texas and was an All-American there and a Big 12 player of the year. Her name resonates with the kids of Texas.”

“The day we announced her as the new coach, she hit the ground running,” Born said. “She started recruiting and began to hire her staff, which is very important. She connected with the girls right away and the incoming freshmen. I’m very excited to see what softball looks like this fall and spring, for sure.”

Hooks said she has been meeting with recruits that have already committed to the softball program.

“Players commit so early now that we have to go through them and put a name with a face,” she said. “I’ll have time a little later to go after some of my recruits.”

Born said Hooks called every member of the softball team within six hours of being hired.

“It’s something I asked of her but I think it was something she would’ve done either way,” Born said. “She was able to build a rapport with them right away.”

Hooks said that some of the players were surprised that she called so soon after being hired.

“I wanted them to feel reconnected to the softball program and to get to know who I was and make an immediate impact on them. A lot of them knew who I was because we played them a lot and some of them said they watched me in my career at Texas. We made some connections that way.”

Hooks said she wanted to get a sense on how the players felt about the team and the direction the program was heading.

“I feel like I got a positive response,” she said.

At 29, Hooks is a young head coach. Born said her age should help her relate to players better but Hooks said the experience of being a former player is most important.

“I’m able to tell them that I’ve done what they’re doing,” she said. “I’ve been in their shoes. I can relate on a personal level that way. I think that carries a lot of weight with these players.”

Hooks said she wants her team to enjoy a family atmosphere within the softball program.

“I want the players to be able to be themselves,” Hooks said. “’Disciplined’ is going to be a word we use a lot. I think discipline takes care of a lot of little things.

“At the same time, we’re not going to forget why we play the game and why we love it. We’re going to be able to cut up and laugh and have fun. We’ll be very business-like on the field when we need to practice and take care of business.”

Hooks said she has high expectations for her first season at Lamar.

“I want to be top four right away,” she said. “Some people might think that’s a little bit of a stretch. I want us fighting for that spot in the conference tournament and really competing. I believe we have the team to do so.

“When we get busy in the fall and in the spring, I believe we have that ability. That expectation might be set a little high, but that’s how I am.”