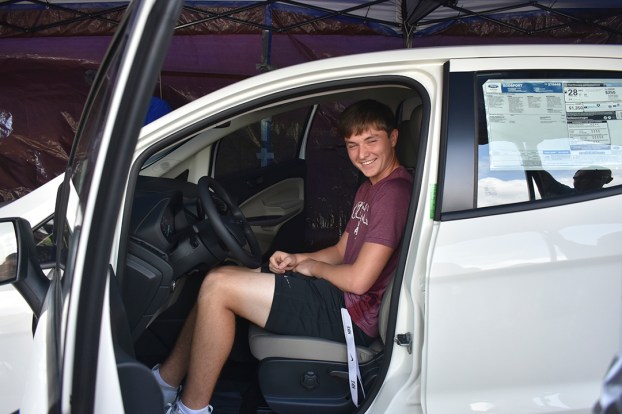 PORT NECHES — Sophomore Brady Nail owns a brand new car — and all he had to do to get it was go to school.

The Port Neches-Groves High School student has had perfect attendance since about the second grade, mainly because his mother won’t let him miss school, he said after seeing his new Ford EcoSport, courtesy of Philpott Ford, on Monday. Now he will no longer have to drive his 2004 Ford, he said.

Jon Deckert, director of student activities, said PNG students know that teachers’ instruction is valuable and the majority of students hate to get behind in their studies if they miss school.

Deckert said there were 402 students eligible to win the car. To be eligible, students needed to have three absences or less.

Students piled into the competition gym where names were drawn and prizes given out. Then Philpott General Manager Bob Thewman asked for students whose names would be found in a hardware store to come forward. Five student came forward but it was Nail that won.

This was the first time for Philpott offer the car giveaway to PNG High School. Later this week, one lucky Nederland High School student will also win a new car.