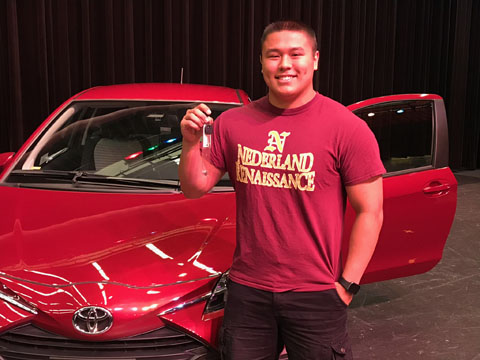 Going to school pays off in many ways — education, friends, life experiences — but going to school could also pay off with a new set of wheels for not missing a day of class.

“I’m shaking with excitement,” Nguyen said shortly after the event.

Nguyen, who said he plans to be a physical therapist after graduation, mentioned how he was joking with his parents earlier that morning before school that he would be coming back with a new car.

When he was prompted to call his parents onstage and tell them that he actually had won, Nguyen said he thought his mother was crying.

“I was not expecting it,” he said.

Daren Granger, general manager at Philpott Toyota, said he felt the giveaway helps encourage students to meet a perfect, daily attendance when they know there’s a possible reward waiting for them at the end of the school year.

“It helps with attendance at school,” he said.

Thewman commented on the level of excitement throughout the center, pointing out that school’s almost over and that that meant summer plans for many. He stressed the importance of making plans and then following through with them.

Thewman teased the audience that one lucky student would end up having a lot of new friends along with a new car.

“This is the only school we give away a car to,” Thewman said.

Other prizes like pocket portable chargers were given away to other students with perfect attendance records. Records for students ran from four-year to 12-year streaks, with each one receiving a certificate and recognition onstage.

Thewman drew out the reveal of the winner through a series of false-flag games and naming routines that he played with the audience.

The grand prize winner was chosen at random from a live drawing.

To be eligible, high school students must have had a perfect attendance record with three or fewer absences — “perfect” permits limited absences — within the 2017-18 school year.

Philpott Toyota and Nederland High School have been Partners in Education since 2004, at which point the giveaway started. The winning student or parent of the winning student will be responsible for paying the taxes, title and license to the dealership before taking ownership of the car.

More time for books; Harper to retire from Groves Library

GROVES — Deborah Harper describes herself as “kind of a bookworm,” though she doesn’t really have time to sit back and... read more