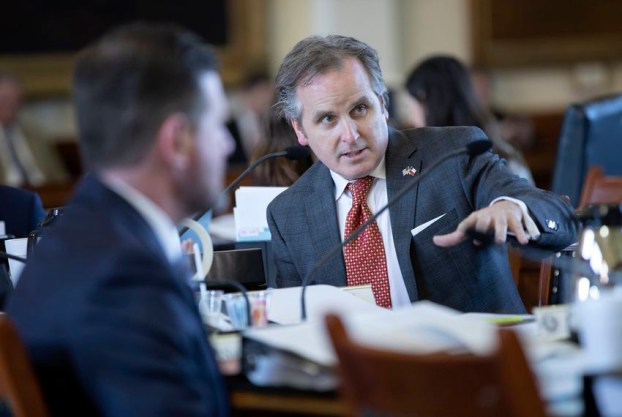 After LGBTQ lawmakers in the Texas House killed a religious liberty bill they feared could be dangerous to their community, the Texas Senate has brought it back — and looks to be fast-tracking it.

House Bill 3172, by state Rep. Matt Krause, R-Fort Worth, effectively died on Thursday after members of the lower chamber’s first-ever LGBTQ Caucus torpedoed it with a pair of procedural ploys. On Monday, a companion bill filed in the Senate by Sen. Bryan Hughes, R-Mineola, moved for the first time in weeks: After being unexpectedly added to an afternoon committee docket, it was swiftly voted out of the panel on a party-line vote.

Within the hour, the bill was placed on the Senate’s agenda, making it eligible for a vote later this week.

As filed, the Senate bill prevents the government from taking “adverse action” against individuals for acting in accordance with their own “sincerely held religious belief or moral conviction, including beliefs or convictions regarding marriage.” Advocates fear that would embolden businesses to decline service to members of the LGBTQ community.

Faced with those concerns at a contentious late-night hearing, Krause significantly watered down the House version, removing some of the strongest language and spurring groups like Texas Impact, a faith-based organization that opposes discriminatory measures, to remove their opposition to it.

That watered-down version — which Hughes has indicated he prefers — would prevent government entities from taking “adverse action” against individuals or organizations based on their “membership in, affiliation with, or contribution, donation, or other support provided to a religious organization” — protections that, in large part, already exist in law. It also would have empowered the Texas attorney general to sue on behalf of individuals or organizations claiming religious discrimination.

In an interview minutes after he watched his bill die on the House floor, Krause said he was surprised advocates and his LGBTQ colleagues opposed the new version of the bill, which he said had been significantly altered to ameliorate their concerns. He added that he hoped to see the bill move in the Senate.

Hughes did not offer a watered-down version Monday, but indicated he plans to amend the bill on the Senate floor so that it aligns with Krause’s slimmer proposal.

“[Rep. Krause] worked very, very hard, worked with stakeholders all across the spectrum, to come up with language that was not offensive, that would accomplish the intended ends without harming, without causing problems,” Hughes said as he laid the bill out at a sparsely-attended committee hearing Monday. He added that he intends to “make the bill look more like the agreed-to language that Rep. Krause was able to work out over in the House.”

Five Republicans on the committee voted for the bill and Sen. Judith Zaffirini, D-Laredo, voted against it.

If the bill is to proceed, it will have to maintain its current blistering pace: Next Tuesday is the deadline for the House to approve Senate bills. Before it reaches the House floor, the measure would need to win approval from the full Senate, be referred by the House speaker to a committee, get scheduled for a hearing and earn a positive vote from a House committee.

Advocates have long feared that floor debate on the bill in the socially conservative Texas Senate could result in a slew of anti-LGBTQ amendments. In a one-page handout issued to Texas House members last week in anticipation of floor debate, the advocacy group Equality Texas warned that if the measure came up for debate, it could spark a “‘bathroom bill’ style floor fight.”

The Texas Senate has already passed a different religious refusals bill. Senate Bill 17, which advocates call a “license to discriminate,” would allow occupational license holders like social workers or lawyers to cite “sincerely held religious beliefs” when their licenses are at risk due to professional behavior or speech. Advocates say the Hughes bill moving this week — at least in its original form — contains all that language and more troubling provisions.

“A majority of Texans want equal rights for LGBTQ people, not discrimination,” said Sam Smoot, interim director of Equality Texas. “In the final days of the session, we hope state leaders will return to the position they held on January 8, that this session would not focus attacks on the LGBTQ community.”

Supporters of the bill — notably, the hardline group Texas Values, which pushed the “bathroom bill” in 2017 — have dubbed it the #SaveChickFilA bill. That apparently refers to a provision that would lay the groundwork for Attorney General Ken Paxtonto sue San Antonio, whose city council voted earlier this year to keep Chick-fil-A from opening a restaurant in the city’s airport after one member, Robert Treviño, said he could not support a company with “a legacy of anti-LGBTQ behavior.”

Disclosure: Equality Texas has been a financial supporter of The Texas Tribune, a nonprofit, nonpartisan news organization that is funded in part by donations from members, foundations and corporate sponsors. Financial supporters play no role in the Tribune’s journalism.

EL PASO — Authorities say the girlfriend of a man charged in the fatal shooting of a Texas sheriff’s... read more