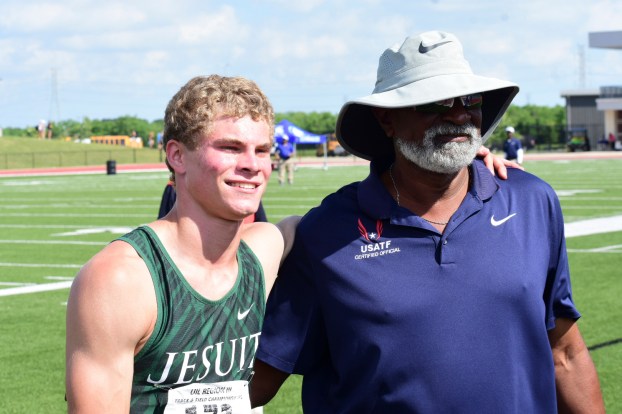 Matthew Boling of Strake Jesuit poses with an official after running the fastest-ever high school 100 meters, according to milesplit.com, for all conditions Saturday in the 5A Region III finals in Webster. Boling’s 9.98-second time was run in 4.2 meter-per-second wind, meaning it won’t be charted among official world-leading times because the wind was stronger than the legal 2.0 meters per second. (I.C. Murrell/The News) 4-27-19

Matthew Boling ran 9.98 seconds in the 6A Region III boys 100-meter dash, but the wind was too strong to qualify as a world record.

No worries for the Houston Strake Jesuit senior. The sub-10 second time was still the fastest ever for a high school sprinter.

On Saturday night, Boling added to his legacy. He set a national high school record in the 100 meters with a 10.13-second sprint in 1.3 meter-per-second wind at the UIL state championships at the University of Texas at Austin.

News of Boling’s 9.98 went viral, and his latest run is likely to do the same. Through 10 events of the 6A boys meet, the 10 points Boling earned by winning pulled Strake within one point (21-20) of Mansfield Summit for the lead. North Shore was tied with Strake for second at the time.

Summit won the 4×100-meter dash, a race in which Boling’s team was disqualified along with DeSoto for a lane violation.

Since Port Arthur Memorial set a national record in the boys 4×200-meter relay in the 2017 UIL 5A state meet, three teams have topped the Titans’ time of 1 minute, 23.52 seconds, in Austin.

Fort Bend Marshall became the third Friday when it clocked in at 1:23.38 to break what was still a 5A meet record for Memorial. That time, however, did not beat The Woodlands’ 2018 run of 1:23.25 in the 6A final, which remains the national and Texas record. In that 2018 race, Seven Lakes sprinted to a 1:23.42 mark for second place, and Converse Judson came within 0.06 of Memorial’s 5A mark.

Marshall’s team included junior Bryson Stubblefield, senior Korey King, senior Dalevon Campbell and senior Devon Achane. Xavier Hull, Ireon Brown, De’Andre Angelle and Kary Vincent Jr. made up the Memorial team in 2017 and came within 0.04 second of beating Fort Worth Wyatt’s national record of 39.76 seconds in the 4×100 that same meet. Memorial’s 39.80 is still a meet record after Marshall — using the same four runners from the 4×200 — won that race in 40.24 Friday.

Vincent, who graduated in 2017, teamed with three others to help LSU win the Southeastern Conference 4×100-meter relay in a time of 38.85 seconds. That helped the Tigers win the team championship with 105 points, beating Florida by 10.

Vincent also made the finals in the 100-meter dash but did not record a time. He had run 10.36 to be seeded eighth after preliminaries.

The meet was held in Fayetteville, Arkansas.

At the Big Sky Conference meet in Missoula, Montana, Greg Laday helped the Northern Colorado 4×100 team win the title at 40.46 seconds. The 2018 Memorial graduate also made the final of the 100 meters with the second-fastest time (10.46) in prelims but did not record a result.