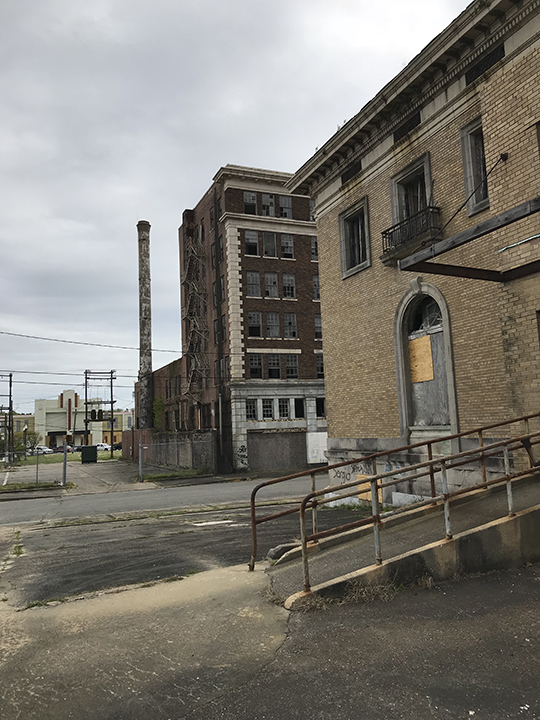 From Federal Building addition, the Adams Building can be seen across the street. (Ken Stickney/The News)

Back from the dead: Motiva eyes historic buildings; looking to move some offices downtown

Motiva has purchased two historic downtown buildings — the Adams Building, later the World Trade Building, at 440 Austin St., and the Federal Building, formerly the U.S. Post Office, at 500 Austin — in a move that may eventually locate up to 500 employees downtown and perhaps turn around downtown’s destiny for good.

The timeline is uncertain until the deal is closed, a company spokesman said Wednesday morning. But people may be working downtown at the sites within three years.

“It’s a moving target, but our goal is as quickly as possible,” Jay Hall, who has guided the acquisition for Motiva, said of a purchase and construction start date. “We’re moving to close as we speak.”

“It’s a tremendous blessing,” said Mayor Derrick Freeman. “It means a lot for the city and it has been a long time coming. We’re turning the corner.”

Hall said the company has executed options to buy the property from private owners, and the target date to close is May 15. He said Motiva notified city of Port Arthur officials and Jefferson County leaders Tuesday.

Some of the employees who are expected to eventually work downtown will move their workstations from Motiva Enterprise’s site on Savannah Avenue. They will include office and support people without duties directly related to “refinery specific maintenance or site operations,” Hall said.

Others who will move into the two buildings will likely be additional hires.

“We are growing, and as we grow in operation, we will need more personnel,” Hall said.

In addition, the downtown facilities will provide meeting space and conference centers. For example, he said, the company might reveal its “state of Motiva” reports or company town halls there.

The company has done “due diligence” and “structural and environmental assessments” started in mid-January. Motiva exercised its options for the properties this week.

Hall said the next phase of the project would involve working with city and other governmental officials for permits for remediation and structural design.

“It’s a great day for Port Arthur,” said Floyd Batiste, executive director of Port Arthur Economic Development Corp. “This is the beginning of development and I can’t see the end of it.”

He said the influx of working people downtown should spur creation or additions of new restaurants, residences and retailers. The city, working with the state and federal government, has created numerous opportunities for tax breaks and advantages that should allow investors to leverage their money. That, he said, was the city’s and EDC’s job: To lure investors to the downtown in ways that would support business and the city itself.

“And this will bring a whole lot of investors,” he said. “When you have people, you have commerce.”

Batiste said while the focus is on two prominent buildings, the growth will mushroom.

Pat Avery, president and CEO of the Greater Port Arthur Chamber of Commerce, which is located next door to the Adams Building, said local refiners and petrochemical companies “feel strongly about Port Arthur.” She said she was not surprised that Motiva is investing in the city.

“All the contractors will want to be closer to Motiva,” she said, suggesting that more office space may develop downtown.

She said the chamber would listen to all voices and stakeholders and try to keep everyone “aligned and moving in the right direction.”

The Adams Building, built by John R. Adams in 1925-26, has six stories at the intersection of Austin and Fifth Street. The cost of construction was $750,000. The property was renamed the World Trade Building in 1971 when Port of Port Arthur offices were located there, said W. Sam Monroe, president of the Port Arthur Historical Society.

The Federal Building, designed by the U.S. Treasury Department, was created as a Post Office and completed in 1912 at a cost of $120,300. It was built across the street from the Adams Building, with “sand-colored brick and graystone trim.” The post office was moved elsewhere in 1965.

Monroe said Port Arthur people took refuge in the building during the flood of 1915.

“One of the stories about that time was there was a child born in the building, and he was named Federal Building Smith, or something like that,” Monroe recalled with a laugh.

He said the architecture, age and quality of the materials in the building made it especially precious. It was placed on the National Register of Historic Buildings in 1986 during a time when it was owned by the Houseman Financial Corp. of Plano. The building has a raised basement and two floors, and an addition was made in 1935 that changed the facility from a U-shape.

“The interior lobby, with vaulted ceilings and marble support pilasters, also contains many design features influenced by the Neo-Classical Revival in architectural

styling,” the application said. “The original lobby still retains all its elegant features.”

“Port Arthur has longed for this for years and years,” he said. “This is unbelievable.”

He said the “second development consequences could be very significant,” and may “regenerate activity in that part of town.”

“There are still buildings there than can be updated and reopened,” he said. “It will benefit everyone from having all that activity down there.

Freeman said Motiva’s purchase and intended development would provide a “legacy moment” for the company and city and a story Port Arthur can promote.

“For so long, people have been telling the bad story of Port Arthur,” he said. “But there are a lot of positive things happening in our city.

“We are in a big port, and Port Arthur is like a large ship. You turn a big ship around slowly, but we are turning it around.”

He thanked the City Council, the EDC, the city’s professional staff and especially Motiva.

“It’s good to see the corporate citizen in Motiva come to the table and raise the bar for all of our partners,” he said.

Motiva to buy 2 downtown buildings, move some operations there