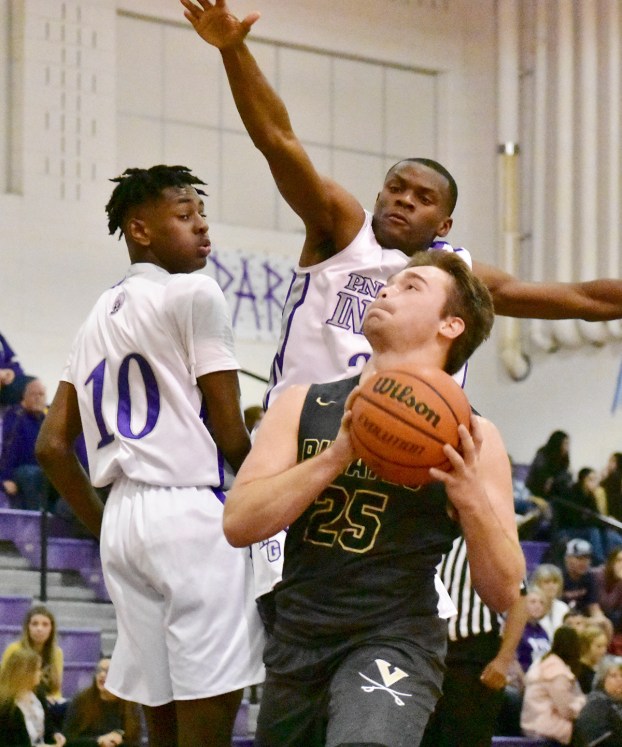 Gage Galloway of Vidor goes up for a basket as Tracy Smith (10) and Jaylan Williams of PNG defend in the first half Friday in Port Neches. (I.C. Murrell/The News)

Third time’s as charming: Indians 3-0 vs. Pirates on season

PORT NECHES — Of the three times Port Neches-Groves and Vidor have faced off this season, this one carried the most importance.

Drake Rojas and Tracy Smith combined for more than 80 percent of the Indians’ scoring Friday in a 42-38 victory, their second in District 21-5A this season.

“It doesn’t matter what kind of team Vidor has, you are going to get their best effort every time, and they play so hard,” PNG coach Pat Abel said. “Coach [Nate] Smith does a great job with them. You almost hate playing them as much as the tougher teams out there, the state champions and all that. In this league, it seems like everybody’s a state champion. It’s pretty intense.”

Memorial is the defending 5A champion and competes in 21-5A.

All three games between PNG and Vidor have gone down to the wire, with one left to play Feb. 5 in Vidor. Rojas banked in a 35-foot three-point basket at the buzzer in a 49-48 victory at the Nederland/YMBL Classic on Dec. 1, and PNG won the Bridge City Cardinal Classic with a 58-51 victory on Dec. 29.

With Friday’s win, PNG ended a two-game skid and won in district play for the first time since beating Dayton on Dec. 18. The Indians did it after trailing 22-15, pulling within 22-21 at halftime on a (10) spin to the basket to beat the buzzer, and trailing 31-30 through three periods.

Quite the relief to win, right?

“I think relief comes right around spring break,” Abel said. “My mentality is, ‘Congratulations, you won. Who’s next?” Abel said.

The answer: a bye date. “We think we got those guys,” Abel joked. “I think we’ll win that one.”

PNG next Friday will host Cleveland in a battle of Indians. PNG won 63-57 in the Hardin-Jefferson Basketball Marathon on Dec. 6.

JUCO BASKETBALL: Seahawks not slowing down after long break

When Lamar State College Port Arthur took off for a 25-day holiday break last month, the Seahawks were mired in... read more