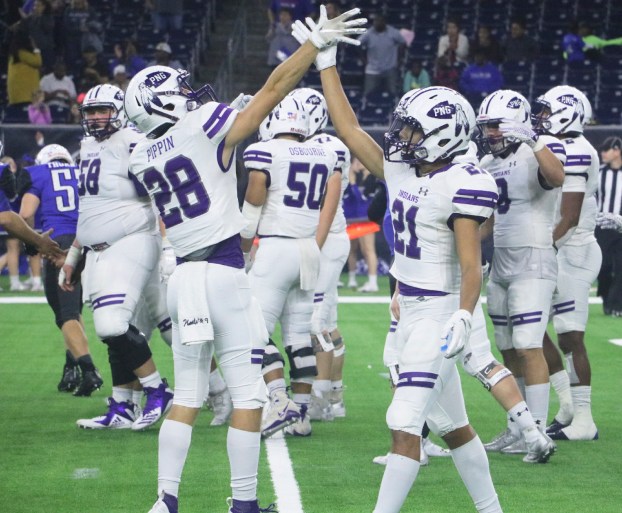 Jose Ceja (21) and Tyler Pippin (28) of PNG celebrate a 50-28 victory over Lindale in the 5A Division II area round at NRG Stadium on Friday. (Michael Sudhalter/Special to The News)

‘Nothing he can’t do’: Former DB, rusher Ceja makes gains as receiver

PORT NECHES — NRG Stadium has been good to Jose Ceja. That, or Ceja has just been good at NRG.

Due in no small part to the 5-foot-9 senior, Port Neches-Groves has won each of its last two games in Houston’s big football dome, both in the area round of the 5A Division II playoffs. Ceja caught two passes, both touchdowns, for 107 yards Friday as the Indians (9-3) beat Lindale 50-28, a big part in quarterback Roschon Johnson’s 477 total yards.

“Without him throwing the ball to me — and we’re out here practicing, too — we can’t get it done,” Ceja said after Monday’s practice. “He’s always dropping the ball right on me where it needs to be.”

While the Indians trailed the Eagles twice, the win was no more dramatic than the first time Ceja played at NRG.

A former cornerback, Ceja rushed 18 yards for a go-ahead touchdown with less than 6 minutes remaining in a 24-17 win over Texas City almost a year to the day of the Lindale game. An injury to then-sophomore Gavin Deslatte forced Ceja — who had a breakout game against Baytown Lee with 111 yards and two touchdowns on nine carries — to start in the backfield.

These days, Ceja is a regular target of Johnson, a future Texas Longhorn who is approaching 4,000 total yards as a senior.

PNG went into preseason camp trying to identify its main wide receivers following the graduation of all-state performer Preston Riggs (among others), and Ceja has brought his own shoes to work. With 59 receptions on the year, Ceja stands 75 yards away from 1,000 receiving for the season.

“It wasn’t really that hard of a transition,” he said. “It was just learning the routes, really, because I already knew all the plays from running back.”

PNG coach Brandon Faircloth knew by the spring Ceja could become more of an impact player as a wideout, with Deslatte returning and Jaylan Williams emerging in the backfield.

“There’s honestly nothing Jose cannot do,” Faircloth said. “Last year, he started the year at DB and was a great defensive back. We moved him to running back and he scored the game-winning touchdown against Texas City last year. He had a great year a running back. He’s a multi-talented kid who can just do it all. He’s on every special team we had. He’s our punter. There’s nothing he can’t do.”

This season’s senior class, including Ceja, is making its dent in PNG lore. Not only have they been part of four straight district championships (all shared), but they’ve reached the third round of the UIL playoffs three straight years, hoping to put PNG in the regional finals for the first time since the 1999 Indians finished state runner-up.

The last time PNG made the third round or further in three or more straight years was the “Astrodomination” era of 1974-77. Those teams went to four straight semifinals and two state title games (winning it all in 1975).

“He’s just a wonderful athlete and the total package as a football player,” Faircloth said.

**CORRECTS plateau in total yards Johnson is approaching this year. Johnson has 2,243 passing and 1,485 rushing yards for 3,728 total yards.**