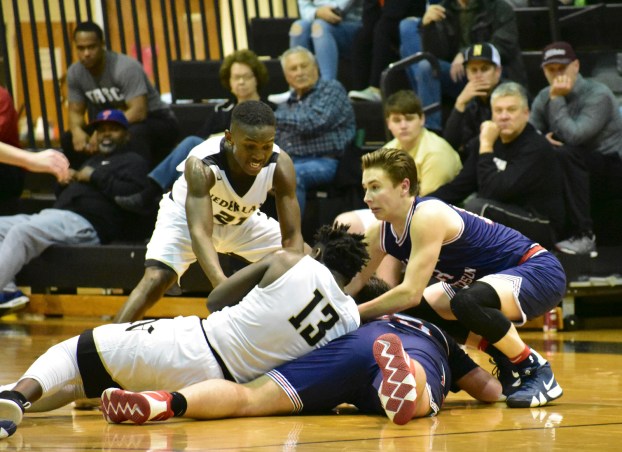 Jason Persohn made all the right moves down the stretch.

Following a missed bonus free throw by Nederland, Hardin-Jefferson’s post man took a pass at the left wing, spun off a defender to the right of the key and drew a foul as he powered his way for a layup with 2.9 seconds left, giving the Hawks a 67-65 victory at the Dog Dome on Tuesday.

Hardin-Jefferson (3-1) was ahead 65-60 with a minute to go before Hayden Hefner sank two free throws for the Bulldogs (2-2). A tie-up with 39.4 seconds gave the Bulldogs the ball back, and Joseph Gipson nailed a three-point basket for the tie with 30 seconds to go.

Nederland was fouled on a rebound with 9.4 seconds left, but Dareion Jones missed the bonus shot. Officials put 0.3 second back on the clock after ruling Hardin-Jefferson touched the ball before it went out of bounds on a rebound attempt of Persohn’s missed free throw. The Bulldogs, however, could not get a shot off before the buzzer.

Persohn led H-J with 26 and Bruce Green poured in 24 points.

Nederland will visit Crosby next Tuesday.

In Kountze, balanced scoring helped the Cardinals (3-1) fly past the Lions.

Austin Richardson and Kolten Weeks each scored 14 points, and Beau Martin and Zeke Champagne each put in 12 for the Cards, who go to Kirbyville next Tuesday.

In Beaumont, a strong first half set the tome for West Brook in a 27-point win over Port Neches-Groves.

Drake Rojas scored 24 points and Tracy Smith had 20 for the Indians, who trailed 25-10 through one quarter and 44-20 at halftime.

PNG will host Kelly next Tuesday.

In Port Neches, Chelsea Carrillo pulled down 14 rebounds to go with nine points, but the 3A Bobcats (4-0) proved too much for the 5A Indians (4-2).

PNG coach Kara Skinner called it an “off day,” adding the Indians didn’t play defense like they could have, missed easy baskets and failed to capitalize on opportunities given. “Hopefully we got it out of our system today,” she said.

Next for PNG is a visit to Anahuac next Tuesday.

Two Tekoa Academy basketball players reached double figures Monday, and the Cougars improved to 4-0 with a 63-52 win over West Hardin in Saratoga.

Tekoa will visit the Memorial JV at 4:30 p.m. Tuesday.

James is averaging 25 points through the first three games.

Jordan Hoy changed the quarterback battle at Lamar when he transferred in from Old Dominion. Quickly moving into the top... read more