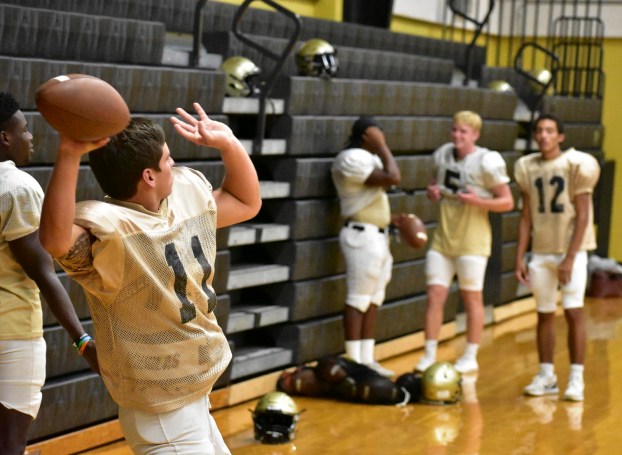 NEDERLAND — Thanks to the impact of Tropical Storm Harvey this week last year, West Orange-Stark did not get to return the favor from 2016 and visit Nederland.

Nederland had to wait another week to kick off the season. West Orange-Stark didn’t start until the week after.

But when both teams started, it was testament to the comeback efforts of Southeast Texas from what’s been called a 1,000-year disaster. That’s how precious the start of the 2018 season is to both teams.

“Just Game 1 in any season is different than any other time,” second-year Nederland coach Monte Barrow said. “Harvey’s one of those things people would like to forget, but there are so many reminders around them, in probably both of our communities and the surrounding communities around them. It’s not something that’s going to be forgotten anytime soon.”

Maybe not forgotten as well is West Orange-Stark’s 42-0 shellacking over the Bulldogs at home two years ago. Those Mustangs remained unbeaten and won their second straight 4A Division II state championship.

Barrow’s Bulldogs didn’t get to seek revenge in Nederland last season, but going back there Friday night isn’t a bother to senior safety Noah Lewis.

“It shouldn’t change a thing that we’re playing over there,” Lewis said. “It’s the same type of field [as in Bulldog Stadium]. We’re playing on grass.”

Nederland, in the newly-aligned 5A Division II, is one class (and two divisions) ahead of West Orange-Stark, but the Mustangs are coming off their fourth straight state title game, which ended in defeat to Texarkana Pleasant Grove last season.

After beating Port Neches-Groves 13-7 in a scrimmage two weeks ago, the Mustangs might go into Friday’s game a little edgy after longtime Nederland district rival Vidor shut them out 19-0 in another rehearsal last week.

“I told our guys, Vidor didn’t do us any favors in that scrimmage by any means,” Barrow said. “Coach [Cornel] Thompson and his staff, they do a great job every year. They’ve been getting ready for Game 1. They don’t game-plan for scrimmages, like most people don’t. … They’re still trying to figure things out and personnel, like we are, so we don’t put a whole lot into what happened in that scrimmage.”

Barrow also has to decide by game time Friday whether senior Blaysin Fernandez can start after spraining his left knee in a home scrimmage against Memorial.

Barrow said tests were negative, but if Fernandez is out, junior Bryce McMorris will take the reins under center.

Senior receiver Carsen Arline said he had solid workouts with Fernandez through the summer and preseason camp.

“We’re trying to get stronger together and everything, trying to get on the same page,” Arline said. “We didn’t have a lot of connections last year, but this year, we’re going to bond together good.”

The Bulldogs expect to match the physicality of the Mustangs, who return only three offensive and four defensive starters including senior running backs Kavyn Cooper (more than 800 yards and 13 touchdowns rushing in 2017) and Justin Sibley, who’s also a proven playmaker a receiver.

“We knew Port Arthur [Memorial] was going to be big, aggressive and have that physicality about them, and I think our guys rise to the occasion in that challenge,” Barrow said, although Memorial had a big second half in a 24-7 win. “The rest of it is about assignment, 11 guys doing what they’re supposed to do because if one’s off, then it’s not going to work.”

Nederland didn’t begin preparing for WOS with the Memorial scrimmage. That started during the summer, according to Lewis.

But the senior who made a team-high eight interceptions last season has full faith in his defense.

“We lost a lot of d-linemen and linebackers, but we showed last week that we can do the job,” Lewis said.

By Van Wade The Orange Leader WEST ORANGE — It just wouldn’t be the same without the West Orange-Stark Mustangs... read more