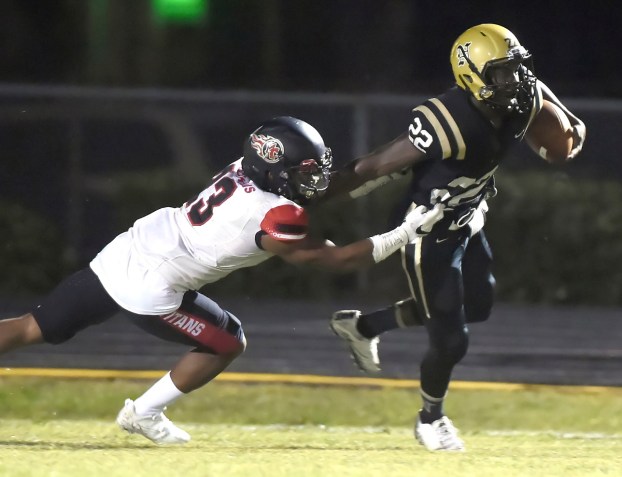 Memorial at Nederland on Oct. 2, 2017 (Brian Vincent/Special to The News) 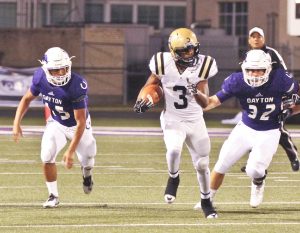 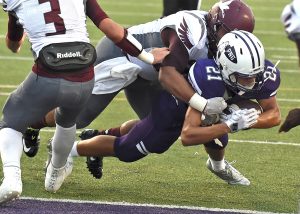 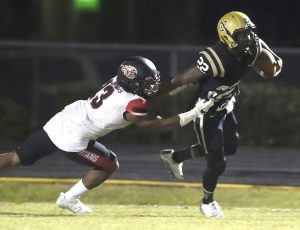 Memorial at Nederland on Oct. 2, 2017 (Brian Vincent/Special to The News)

District play won’t start for another month, at least among Jefferson County’s three 5A high schools.

But this is the season the landscape changes for former District 22-5A rivals Memorial, Nederland and Port Neches-Groves.

Class 5A in the UIL still includes 32 districts, but 16 have been designated for high schools with enrollments between 1,840 and 2,189 (1267 schools), and the other 16 for enrollments between 1,150 and 1,839 (125 schools) based on enrollment as of last Oct. 27. As usual, four teams from each district will participate in a playoff format that goes six rounds.

To put in perspective, Houston’s Margaret Long Wisdom High, formerly known as Robert E. Lee High, is the largest in District 9-5A with an enrollment of 2,185, five shy of becoming a 6A school. Memorial’s enrollment was 2,044, the fifth largest of eight schools in the district.

The enrollment figures for each school are according to Dave Campbell’s Texas Football.

The district realignments have led to the three Jefferson County 5A schools having a bye week Sept. 21 and district play beginning the next week. But the biggest challenge Memorial coach Brian Morgan foresees rests in travel logistics.

“It’s trying to do logistics when you have to travel two hours for games,” Morgan said, “and that’s two hours not based on traffic. There are a couple of games where we’re going into Houston, we’re going to New Caney, so you’re talking about drive with traffic. That throws your Friday routine off, as compared to last year. We went right down the street to Port Neches. It wasn’t that much different from going to our stadium.”

District 22-5A also included former Beaumont schools Central and Ozen, which merged to form 6A Beaumont United; Vidor; Lumberton; Baytown Lee and Livingston. Memorial is now placed in District 9-5A Division I and will travel to five schools in Harris County — Galena Park, Goose Creek Memorial, Houston Austin, Houston Wisdom and Kingwood Park. The other two high schools in the league, New Caney and Porter, are located in Montgomery County.

District 12-5A Division II officials decided to begin their games at 7:30 p.m., giving school districts time to finish afternoon bus routes before picking up bands and spirit groups to take to games. That league will include Baytown Lee, Crosby, Dayton, Barbers Hill, Nederland, PNG, Santa Fe and Vidor. The start time in 9-5A-I play is 7 p.m.

“It’s going to put us leaving during the last period of the day now, just to ensure that we’re there with plenty of time because you don’t know what kind of traffic you’re going to get on a daily basis,” Morgan said.

The classification divisions will not affect any other sport. Memorial, Nederland, PNG and Vidor will compete in 21-5A for other sports, along with Cleveland, Dayton and Barbers Hill.

Morgan, who was a Memorial assistant last year, said his players knew what to expect when taking on their next-door neighbors in 22-5A. District 9-5A-I doesn’t give the Titans the same familiarity among their opponents, except that they beat Kingwood Park in last year’s 5A Division I bi-district round and Porter in the same first round two years ago.

“We don’t know what to expect on a day-to-day basis,” Morgan said. “It’s strictly all off of film. It’s a little more unknowns, I guess.”

Nederland and PNG have some more familiarity in 12-5A-II with each other, as well as Lee and Vidor. PNG defeated Crosby 72-69 last season, topped Barbers Hill at Lamar University the year before and edged Dayton in 2015, all in bi-district play.

Nederland beat Porter in the first round last season.

In Lee, the two Mid County rivals are expected to see 2017 22-5A newcomer of the year Ijeanea Wooley, who ran and passed for almost 2,000 yards. The Ganders, who were 1-8 last year, have more depth after finishing with fewer than 25 players.

Santa Fe will play in memory of the eight students and two substitute teachers who were killed in a May 18 shooting at the high school in Galveston County.