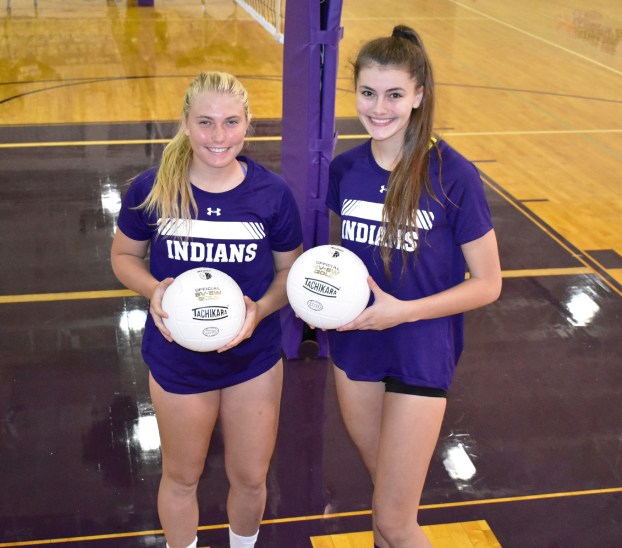 PNG seniors Bayja Newby, left, and Kaitlyn Gil earned All-District 22-5A honors last season, but the Rock-A-Noos will have to pursue another championship in 21-5A. (I.C. Murrell/The News)

All varsity matches, unless otherwise noted, begin at 6:30 p.m.

That’s a big loss for any volleyball team, but seven who saw significant playing time during the Rock-A-Noos’ 29-6 season are returning. It makes the first practices of the season a little smoother.

“Since we played together for so long, I feel like we already have a team chemistry,” Kaitlyn Gil, the 22-5A MVP last season, said.

Barbara Comeaux, Texas’ winningest high school coach at 1,239 victories now in her 48th season of coaching (47th with the Rock-A-Noos), said her charges have had great practices to start the season with.

“We’ve only had two,” she cautioned. “We started [Wednesday]. That makes it tough, but we have to jump right in it. We’ve had a good spring.”

The chemistry was evident to first assistant Brittany Fruge from the beginning, given the experience the Rock-A-Noos boast.

“These girls love each other,” she said. “You can tell when we do team bonding drills, like when we do a synchronized passing drill, they nail it every time.”

Fruge, senses that PNG’s upset loss to Santa Fe in the 5A area round has motivation for the 2018 Rock-A-Noos, who’ll compete for a third straight district crown and 32nd under Comeaux — this time in 21-5A.

“Anytime you leave the court and you know you could’ve played better — we were peaking, we were looking really good — and then for whatever reason that night, nothing was there … it was frustrating because that team had a lot of heart and a lot of potential,” Fruge said. “We had all the right pieces.”

Many pieces, including Gil, are back.

“We’re not letting that match determine how the season goes,” Gil said. “We’re trying to start on a clean slate and go to the third round again, like we did in 2016.”

Or farther. PNG last reached the fourth round, or regional semifinal, in 2002.

Gil’s classmate Bayja Newby made the all-district first-team, along with fellow returnee Elizabeth Bolyard. The Rock-A-Noos are also depending on the experience of juniors Layla Stansbury, Kasidee Sartin, Halley Smith and Maylin Louvier to navigate what could be a tougher 21-5A campaign.

PNG, Memorial, Nederland and Vidor have all been moved from 22-5A to 21-5A, where they’ll take on Barbers Hill, Cleveland and Dayton. Barbers Hill beat PNG in the 2016 5A Region III quarterfinals following an unbeaten district run and in 2017 was second in 21-5A to Kingwood Park before reaching the area round of the UIL playoffs.

“We just practice hard,” Newby said. “Hopefully, these stronger teams will help us prepare for the playoffs in the future.”

Comeaux, however, is getting the Rock-A-Noos to take a playoff-mode mentality as district play approaches.

“I definitely think adding Dayton and Barbers Hill adds to the strength of our district,” she said. “I like it because all it’s going to do is make us stronger.”

One last jewel to commemorate Memorial’s UIL 5A state championship in boys basketball has come in. The 2017-18 Titans received... read more