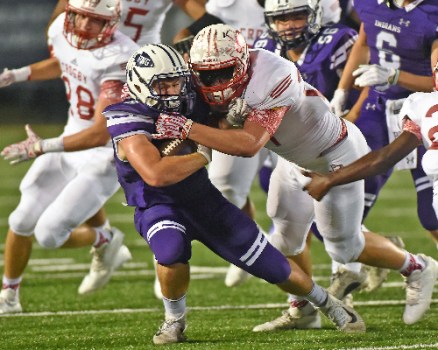 Gavin Deslatte of PNG makes a big first-half gain against Crosby on Friday. (Brian Vincent/Special to The News) 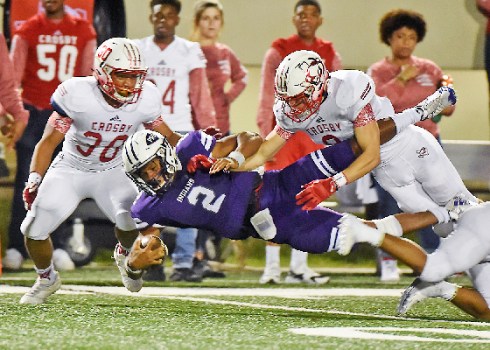 Roschon Johnson of PNG fights for extra yards against Crosby on Friday. (Brian Vincent/Special to The News)

BAYTOWN — For the second week in-a-row, the Indians of Port Neches-Groves (9-1) found themselves in a one-score game in the final seconds. This time, however, the Indians came out on top in a thrilling 72-69 victory over the Crosby Cougars (9-2) at Stallworth Stadium on Friday.

As the dust settled and after a game that featured two quarterbacks who combined for more than 1,000 yards from scrimmage, a running back with over 350 yards rushing, 133 combined points and over 1,300 yards of offense, the game came down to the last 25 seconds and two yards.

Port Neches-Groves head coach Brandon Faircloth put the ball in his quarterback’s hands like he has all season. Roschon Johnson intentionally fell short of the goal line on the previous two plays in order to run more time off of the clock. The Crosby offense had already produced 69 points. Faircloth wanted to leave them as little time as possible.

On third down, the junior quarterback punched it in to make the final 72-69 following the two-point conversion. Johnson finished the game 598 total yards (272 rushing, 326 passing) and 10 total touchdowns.

Faircloth said he had never been in a game like this.

“I’m so proud of our kids for never giving up,” he said. “We knew this type of game was a possibility. It came down to 20 seconds and we were able to make a play. I’m really proud of our offense for staying in there. Our defense played hard. I give Crosby a lot of credit. They have a great team. We thought this could happen — It’s not really good on my heart. I’m just proud of our guys for making on last play.”

The biggest lead of the night came after a four-yard run by Johnson that put the Indians up 20-7 over the Cougars with 11:56 remaining in the second quarter. Crosby scored on a nine-yard run by Craig Williams to bring the score to 20-14.

Williams finished the game with 354 yards rushing and four touchdowns. After Crosby recovered an onside kick recovery, the Cougars wasted no time in scoring taking a 21-20 lead.

The two teams exchanged scores until ten seconds left in the third quarter when the Cougars went up 56-48. The Cougars, as they had all night, responded with a score and the two-point conversion tied the game at 56-56 with at the start of the fourth quarter.