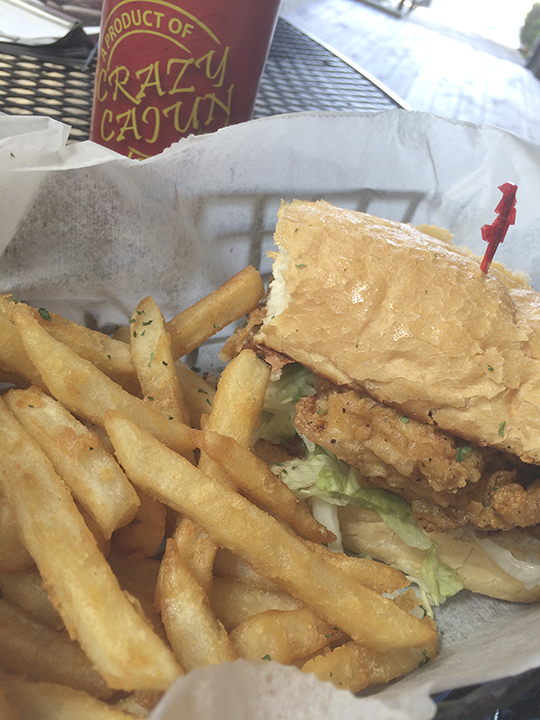 Shona Chesterman gave me a hug when I left Crazy Cajun. Maybe everybody gets such great attention. Maybe everybody was extra congenial due to a sunny day, live band and grand opening samples of bread pudding, boudain balls, fried pickles, catfish and more.
My cup runneth over
I’d been hearing about this new place at 2310 North 11th Street in Beaumont, where most recently Starvin’ Marvin’s was. A Facebook post caught my eye and I showed up for Saturday’s grand opening and took home a door prize of Crazy Cajun hot sauce, with “A Product of Louisiana” branding.
I behaved as I would in Louisiana and ordered an oyster poor boy, a very favorite of mine. On my second bite I was still raving about how lovely it was that the bread was toasted and I’m thinking that the insides are so big I wonder if I hadn’t received fried chicken nuggets. But those fried oysters were that big and soft and savory. The fries were golden brown like I love them and while I normally just taste the tartar sauce to save calories, I dipped all those fries in this good sauce.
A Mr. Worthington from the Cajun band outside recognized me from Knights of Columbus dealings in the Port Arthur area and I’m pretty sure he said his band just started calling themselves the Recyclables. They dished up some Beatles and rock classics between their Cajun sounds making a relaxing Saturday by the patio my new favorite thing.
It was just luck that all the free samples were circulating. I also loved the praline chicken. I saw eggplant on the menu but I’ll have to get back to Crazy Cajun to sample that one and take advantage of the free hamburger card I also won.
Hummus overload?
A pool-party hostess specifically requested ‘finger foods” be brought. I asked about a curry rice salad I make and still got the vibe of “more fingery.”
I had all the ingredients for hummus and decided it would hit the spot. Then I started thinking about the people invited to this party tended to be healthy-minded people who gravitated toward natural foods. I began thinking “what if everyone brings hummus?” Turns out, nearly everyone did. They were all different and all enjoyed.
Questions? Comments? Write to darraghcastillo@icloud.com