Chris charges forward: Groves’ Stroud one back in PGA Championship 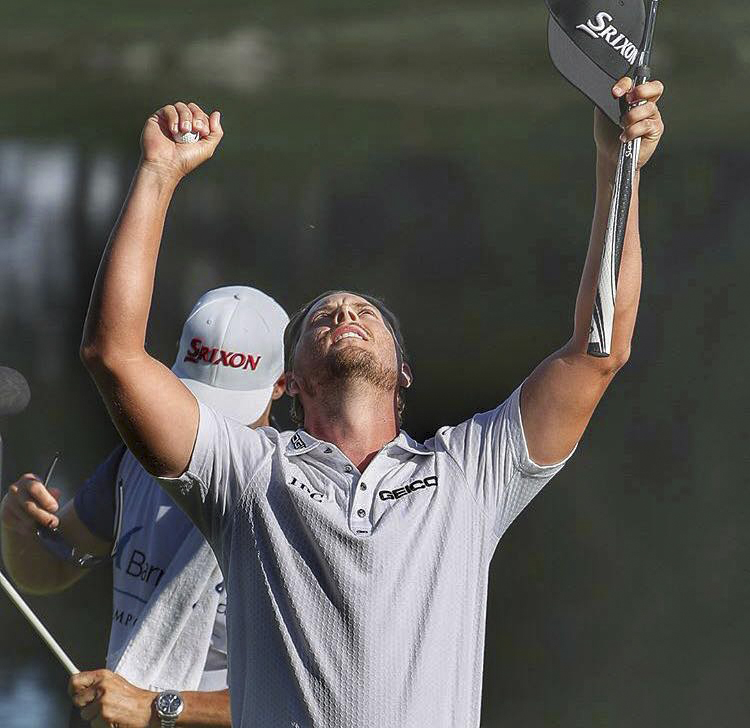 Chris Stroud, shown after his winning putt last Sunday in the Barracuda Championship, is one stroke behind co-leaders Thorbjorn Olesen and Kevin Kisner through one round in the PGA Championship. (Courtesy photo)

The News and The Associated Press

CHARLOTTE, N.C. — It’s amazing what can happen when someone just gets a foot in the door.

Andrew Landry went on to lead the first round of the U.S. Open in 2016 after earning a berth in sectional qualifying in Memphis, Tennessee. Chris Stroud needed two playoff holes to win last weekend’s Barracuda Championship and earn an automatic bid into the PGA Championship.

What has that led to? Third place after one day.

Something about coming from Groves, right?

“Casey Clendenon, my caddy, is really helping me stay out of my own way,” Stroud said. “I don’t think, talk or worry about anything golf. I simply see and do. I don’t care what happens. I have completely given up care or concern where the ball goes. I am using very little energy. Just like Tim Robbins in ‘Bull Durham’: ‘Don’t think, just throw.'”

Stroud is one of four golfers who posted a 3-under 68 Thursday in the final major of the year. Thorbjorn Olesen of Denmark rolled in a 30-foot birdie putt on the final hole for a 4-under 67 and a one-shot lead among early starters in a PGA Championship that was making it hard for Jordan Spieth and just about everyone else at Quail Hollow.

Not since 2010 at Whistling Straits has a score as high as 67 led the opening round of the PGA Championship.

Spieth was happy to get through with a 72 in his quest to become the sixth player to complete the career Grand Slam. U.S. Open champion Brooks Koepka fared much better with a 68 and was among those one shot behind.

But even Koepka had a hard time making putts on new Bermuda greens that were firm and so fast that players had to be defensive.

“Anything under par on this golf course is a good score,” Olesen said.
Koepka had birdie putts inside 15 feet on his opening six holes and converted only one of them. He wasn’t the only player struggling to make them.

“If they get about a foot faster, they are kind of unplayable with the pin placements,” Koepka said. “These slopes are just getting bigger and bigger with the speed of the greens and the grain. If you miss it just by a couple feet from the flag, you can hit a great shot in there and wind up 30 yards away.”

It showed on the leaderboard.

No one managed to post anything better than 67, and Olesen needed a long putt on the 18th hole for that.

Grayson Murray, a North Carolina native who hit the opening shot, was the first to post 68. He was joined by Gary Woodland, D.A. Points, Koepka and Stroud.

Paul Casey was among those at 69, while Dustin Johnson, Jason Day and Hideki Matsuyama were in the large group at 70.

Stroud, a 2000 Port Neches-Groves graduate and Lamar athletics hall-of-famer, followed his first PGA Tour victory with a bogey-free round. He birdies the 10th, 11th and 18th holes to go 3-under on the back nine.

The advantage of warm weather and, for the first time all week, plenty of sunshine was a slightly drier course that allowed the ball to roll. It was a big advantage to be in the fairway, and Olesen had only a 7-iron into 18th green. He played it well out to the left, leaving a downhill putt.

“It was a little bit of a safe shot into the green,” he said. “That’s what can happen on this golf course. When you play safe into the greens, you give yourself very tricky putts, like the one I had — downhill, left-to-right. It was very, very fast. But it was just a very good roll. So it was nice to see that one drop.”

Johnson, the No. 1 player in the world, broke par for the first time in a major since the U.S. Open last summer at Oakmont, which he won for his first major. He played in the same group as Day, who was headed for another poor start until he made eagle on the par-5 seventh, followed with a birdie and wound up at 70.

“It’s going to test your patience one way or another,” Koepka said. “That’s just a major. You’ve got to stay patient. You can’t make doubles out here. That’s the big thing. Make sure the worst score you make is a bogey and give yourself a couple of good chances on the easier holes.”

That wasn’t easy for so many others.

Sergio Garcia took a pair of double bogeys at the end of the back nine and wound up with a 75. Ernie Els, in what might be his last PGA Championship, shot 80 for only the second time in this major. The first time was at Bellerive in 1992.