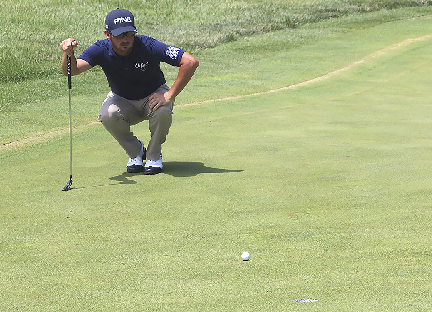 Andrew Landry celebrated his move to the top of the Web.com Tour money list by shooting a career low round on that tour of 8-under par 63 Friday in the opening round of the Digital Ally Open in Overland Park, Kan.

And he did it despite a bogey on his first hole of the day — the par 4,
10th — on the Nicklaus Golf Club at LionsGate.

His blazing finish, highlighted by a 30 on his second nine holes of the day,
resulted in a one-shot lead over four players.

“Kind of a shaky start,” Landry said. “I was sort of sluggish after laying
around all day Thursday because of the rainout. “My back was tight, I felt
tired. To be honest, I didn’t feel like playing.”

An eagle at the par 5, 15th got the juices flowing for the Port Neches-Groves ex. That moved him to two under, after he’d gotten to even with
a birdie on 13. Over his last 13 holes, Landry made seven birdies and an
eagle. The only blemish was a second bogey at the par-4 fourth.

It was his second consecutive competitive round with a total of eight
birdies, but Landry wasn’t sure whether it was his low round on the Web.com Tour. A records check revealed his previous best was 64. He did that two weeks ago in Utah and in 2015 in Nova Scotia.

“It was a great round but I didn’t do anything super special,” he said. “I
was just real solid in everything. I think I missed one putt that I thought I
should have made. Other than that, it was just hitting fairways and giving
myself good birdie looks.

Landry, playing only his second tournament with a new Ping G400 driver,
averaged 311 yards off the tee and hit 13 of 14 fairways. He took only 24
putts, the longest of which was a 20-footer for eagle.

“I was a little shaky with that driver the first couple of rounds last
week, but I got comfortable with it on Sunday,” he said. “As wet as this golf course was, I am really pleased with averaging 311 yards.”

The eagle that jump-started his round came after he pured a 4-iron to 20
feet from 228 yards.

Because of the 7-inch rain that flooded the Kansas City area on Wednesday
night, the first two rounds of the tournament were backed up one day. A
36-hole finale is set for Sunday.

“It’s been a while since I’ve done one of those,” Landry said. “I start
late on Saturday, so there will be a quick turnaround. I just need to keep
playing the way I am. It would be sweet to put up another W before I take next week off.”