Trying some of the tastiest BBQ that Texas has to offer 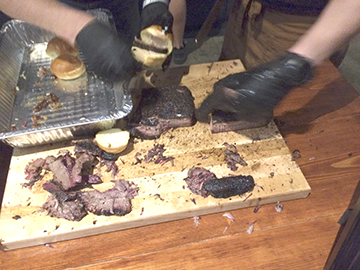 The June “Texas Monthly” cover is styled like a classic still life of barbecue, with brisket, raw onion and pickles, white sliced bread, links and even a Big Red bottle with goblet. It’s a fun and clever look for the magazine’s much anticipated 50 Best BBQ Joints issue.
“Welcome to the Golden Age of Texas Barbecue,” the cover reads.
Inside is a passport that encourages you to check off these places as you road trip across Texas. Let’s go.
Of this year’s list, I’d been to City Market in Luling and Pecan Lodge in in Dallas. I’m hoping 2017 will get me to Franklin Barbecue in Austin. It’s the one with the long, long lines.
So then I wind up at the Texas Monthly Meatup at Silver Street Studios in Houston. Can I believe how good life is? Some of the chosen few “joints” served their specialties and it was “all that.” The restaurant representatives were so pleasant, the foodies were so “into” it and I could not have enjoyed myself more.
It was all a smoky haze with memorable chunks of meat – yes, the fat included – a chocolate-covered toffee with bacon tucked inside and pork belly rounds.
Can you stand it?
I had anticipated this event for a while and was determined not to get full on “fillers.” The funny thing is, I never saw any baked beans, cole slaw or potato salad all night long. These people were there for the meat and the pit masters knew it. If you left there hungry, that was on you.
It was all good, and I’m going to investigate some of these sites further: Evie Mae’s Pit Barbecue in Walfforth; Killen’s Barbecue in Pearland; and Corkscrew BBQ in Spring.
I enjoyed every bite and figured I wouldn’t crave barbecue for a good, long time. The very next day I smelled some in a restaurant parking lot. I was ready to go again.
Upcoming events include Whiskey Affair, Oct. 19 in Houston; Texas Monthly BBQ Fest, Nov. 4-5 in Austin and The Edge of Texas, Nov. 10-11 in Dallas. Sign up at TexasMonthly.Com/TMEvents.