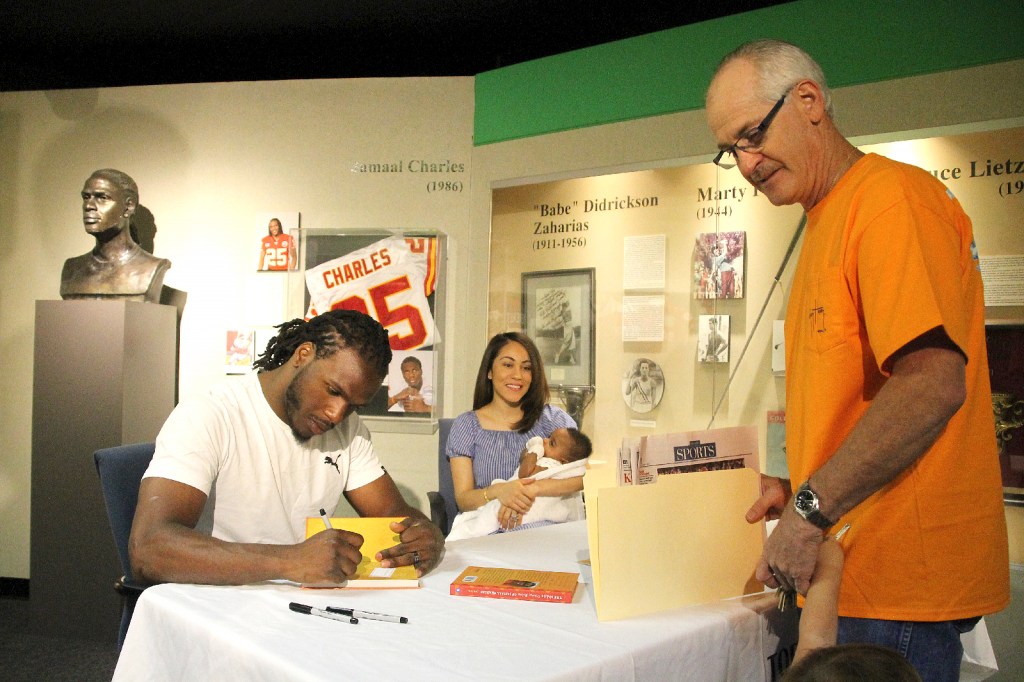 Port Arthur native George Elizondo, who lives in Beaumont, holds the hand of his granddaughter Layla Elizondo as he has his copy of “The Middle School Rules of Port Arthur” autographed by Denver Broncos running back Jamaal Charles on Friday afternoon at the Museum of the Gulf Coast in Port Arthur. Watching the signing is Charles’ wife Whitney and their baby son Isaiah. (I.C. Murrell/The News)

Jamaal Charles did not want to tell his story at first, but he said Kansas City Chiefs public relations chief Ted Crews eventually convinced him otherwise.

Crews reached out to Jensen about making Charles a subject, and now Charles doesn’t regret it at all.

“It’s very cool to tell life stories about your life and even go through life stories to help kids out and show them what you’ve been through,” Charles said. “This will help inspire kids to read the book and to hopefully give them some hope. They’re not the only ones who’s struggled through school and through childhood, things like that.”

On Friday, the new Denver Broncos running back returned home to Port Arthur to sign copies of Jensen’s book “The Middle School Rules of Jamaal Charles,” which was released in February. A long line had formed just minutes before the 2 p.m. start time at the second floor of the Museum of the Gulf Coast, where Charles, who brought his wife Whitney and three kids (daughters Makaila and Makenzie and 3-month-old son Isaiah), sat in front of his museum hall of fame bust welcoming readers.

Charles was still a member of the Chiefs when the book was released, but the team released him later in February as he was recovering from an operation on his meniscus, which caused him to miss much of the 2016 season. Charles had torn his ACL during a game in 2015.

“Altitude is about the only thing because I like to breathe,” Charles said. “Once you get used to it — the couple of days going up the stairs, I could hardly breathe — you just have to get used to the altitude. It’s a disadvantage to most because of the altitude. We can go somewhere and play lights-out somewhere else.”

“The Middle School Rules” is a series of stories about current and former professional athletes “as told by” Jensen, a former reporter and columnist who covered the Chicago Bears, Minnesota Vikings and Green Bay Packers. Other subjects in the series include former Bears linebacker Brian Urlacher, former Bears cornerback Charles “Peanut” Tillman and WNBA star Skylar Diggins-Smith, now with the Dallas Wings.

“It’s actually more for elementary and early middle school students,” Jensen said Friday via phone. “We did research and it’s really more of an inspirational book. It’s catered to elementary kids because they’re going to middle school. A kid with the average reading ability would be able to read the book confidently.”

The book on Charles centers on his well-documented rise from a child dealing with a learning disability who at age 10 discovered his athletic ability while competing in Special Olympics. Charles went on to become one of Port Arthur Memorial’s earliest football greats and is still Port Arthur ISD’s all-time leading rusher. (Memorial opened when Charles entered 10th grade in 2002.)

“My favorite part is just explaining my challenge with the reading part and getting the SAT [score] to get into college and racing against Danny [Gorrer],” Charles said, mentioning his Memorial teammate who spent six seasons as an NFL cornerback. “Most of the parts in the book is just exciting to talk about.”

Charles won a national championship at the University of Texas as a freshman and was drafted by the Chiefs in 2008. He is the Chiefs’ all-time leading rusher with 7,260 yards and has averaged more yards per carry (5.5) than any other running back with at least 1,000 carries.

Charles said Friday he is unsure where the Broncos think he falls on the depth chart, especially considering his last two seasons have been hindered by injuries.

“When you give me a chance to play, it’s going to show for itself I’m going to fall,” Charles said. “I don’t know right now. I can only speak on going up there to compete.”

Port Arthur native George Elizondo, who was among the early visitors at the signing, said he’s become a Broncos fan now that Charles is in Denver.

“We’re going to watch him and hopefully he’ll have a great season,” he said, adding he was at the museum last month for recent Broncos defensive coordinator Wade Phillips’ signing of “Son of Bum: Lessons My Dad Taught Me About Football and Life” last month. Phillips, who graduated from Port Neches-Groves, was hired as defensive coordinator for the Los Angeles Rams this offseason.

Elizondo recalled his favorite memory of Charles as a Memorial Titan, when he ran for 371 yards on 49 carries against Midland Lee in 2004.

“I had seen all his games when he came up as a sophomore at Memorial,” said Elizondo, an information officer for Port Acres Little League. “The speed was incredible. He’d get to the outside, and you couldn’t touch him. He had an outstanding performance against Midland Lee. Almost 400 yards. It was incredible.”

While Charles is in the Museum of the Gulf Coast Sports Hall of Fame along with the likes of Phillips, former Dallas Cowboys coach Jimmy Johnson and former NBA star Stephen Jackson, he wants to prove he still has talent that will likely help him end up in the Pro Football Hall of Fame in Denver.

“It’s just another team I’m excited to be on that gave me another opportunity,” he said. “It’s a great organization and I’m excited about the future.”