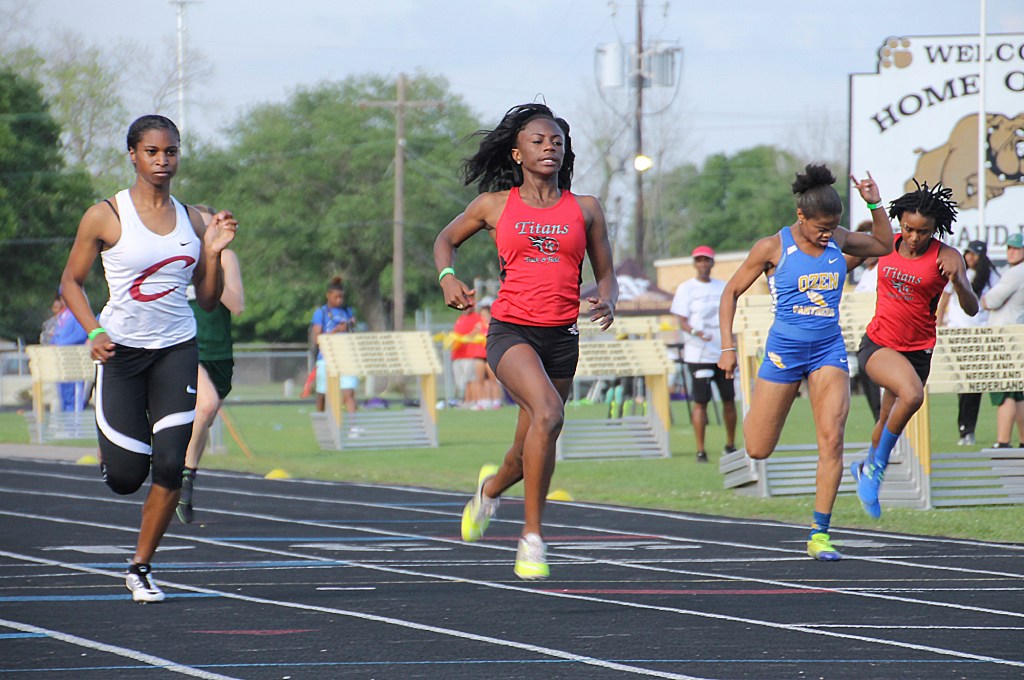 Capri Wilson of Memorial sprints to victory in the 100-meter dash during Wednesday’s running finals of the District 22-5A meet in Nederland. (I.C. Murrell/The News)

The District 22-5A track meet wrapped up Wednesday evening at Bulldog Stadium with plenty of winners from Mid- and South County, but Beaumont Central came up the big winners in both boys’ and girls’ team standings.

Central topped the boys’ standings with 185 points, followed by Port Arthur Memorial with 158, Nederland with 87 and Port Neches-Groves with 67.5.

Central’s girls team had a little closer battle to the team crown with 146 points, 12 more than second-place Nederland. Memorial (121) and Ozen (83) rounded out the top four.

Kary Vincent Jr. began his march to another state championship in the 200 meters, winning that race with a time of 21.24 seconds. He was 0.32 ahead of Central’s Devin Broussard.

Ja’Quan Francois was the only sub-2 minute runner in the 800 meters. He set a time of 1:59.21, more than four seconds ahead of the runner-up.

Carlos Barbosa of Nederland swept the 1,600- and 3,200-meter runs, and the Bulldogs took the top three positions in each race. Carlos Rodriguez was second in the 1,600 and third in the 3,200, and Blake Mortera reversed those positions for both races.

Nederland was strong in the long distances. Following Rachel Morrison’s win Monday in the 3,200, Madison Ledet came in second in the 1,600 with Morrison coming in third.

The top four in each event advance to the 5A Region III area meet at Barbers Hill next week.