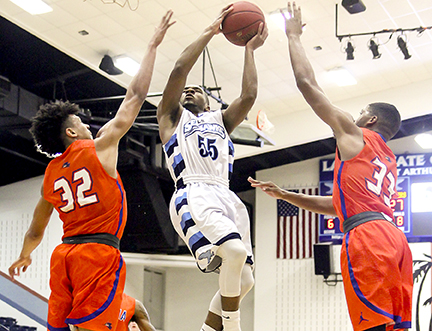 The Lamar State College Port Arthur Seahawks had to win Wednesday and the team knew it.

LSCPA defeated Angelina College 77-59 to notch the Seahawks’ second win in Region XIV. Angelina came into the game second in the conference with a 5-2 record.

The Seahawks are now 11-6 overall and 2-6 in conference play and hit the road to face Jacksonville College at 4 p.m. Saturday.

LSCPA forced 21 Angelina turnovers and got 22 points from Ozen graduate and Seahawks freshman John Comeaux and 19 points and 13 rebounds from Petar Radojicic of Serbia.

Freshman Chol Luk of Australia added 12 points and was a perfect 6-for-6 from the free throw line.

“This was a tough win,” Radojicic said. “We had a great crowd here and we played fundamental basketball tonight. We hit our free throws and rebounded and that got us the win. We had to have this one.”

Comeaux agreed with Radojicic that Wednesday was a game the Seahawks felt was a must win. “There were no ifs ands or buts about it,” Comeaux said. “We had to get it. We came in strong and they came in second in our conference. This means we are improving and that we are getting better.”

Akol Deng hit a jumper for LSCPA, Radojicic had a layup and then Cameron Frank capped a 5-0 run with a jumper of his own to make it 42-37 LSCPA with 15:15 on the clock.

The game was put away when the clock got under 10 minutes to go.

Radojicic connected on another layup with 8:04 left in the game to give the Seahawks a 58-48 lead. The lead stretched to 15, 64-49, when he hit a pair of free throws with just over six minutes left.

LSCPA’s inside-outside game between Radojicic and Comeaux was very effective Wednesday and caused problems for the Angelina defense all night.

“We work together every day in practice,” Radojicic said. “We are really starting to have great chemistry.”