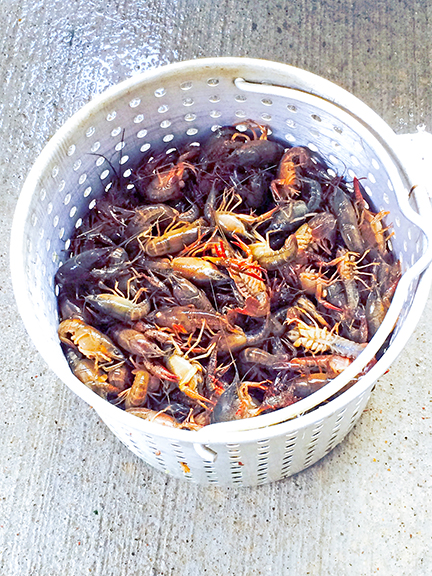 Courtesy art by Darragh Doiron Crawfish ready to boil. The season is near.

CULINARY THRILL SEEKING: Something for your belly, your ears and your dancing shoes

You can pass a good time at Rodair Roadhouse just on the food. But wait, sometimes there’s a bunch of live music and dancing. Wonder how many calories a good Cajun waltz will burn off.

“Where Bayou Country Meets Gulf Coast” is the motto which sums up a relaxed attitude at Rodair Roadhouse, on Jade Avenue in Port Arthur. Even the fishing lures that adorn the place tell the owners’ stories. Richard Hudson and Shawn Skinner are good talkers with good stories and John Dingle is keeping the good stuff coming out of the kitchen.

Hush puppies with Steen’s Syrup as a dip? Fried green tomatoes that make you want to slap your mama? Hot and crunchy shrimp bites like none other? Rodair Roadhouse has been paying attention to flavorful little details.

The proof may be in the pudding, as in the bread pudding that Skinner reveals is buttery to the max. Some of their “secrets” are sharable and some will remain in the family. If Skinner starts talking about that butter content and you don’t want to hear, cover your ears until he’s moved on to the banana or key lime pie.

I haven’t even touched on the main dishes, so go see for yourself. They’re practicing in the back on crawfish but promise that when they’re bigger and better, they’ll be on the menu for fans.

A houseguest mentioned she wasn’t keen on orange foods. What? Around this season? Pumpkin and yams cooking are unpleasant, she said. No worries. I’m adaptable. But those sweet potatoes I’d planned to roast and serve with olive oil and curry powder were looking at me. I awoke extra early and cooked them for my breakfast while she was still asleep. Potato discs, crispy from grilling in coconut oil and topped with a bit of fruity jam went well with eggs for a cheerful morning meal. That’s thinking outside the orange box.

HEALTHY LIVING: Supplements: How much is too much?

Ideally, we are eating plenty of fresh or frozen fruits and vegetables, along with lean meats and fish. This should... read more