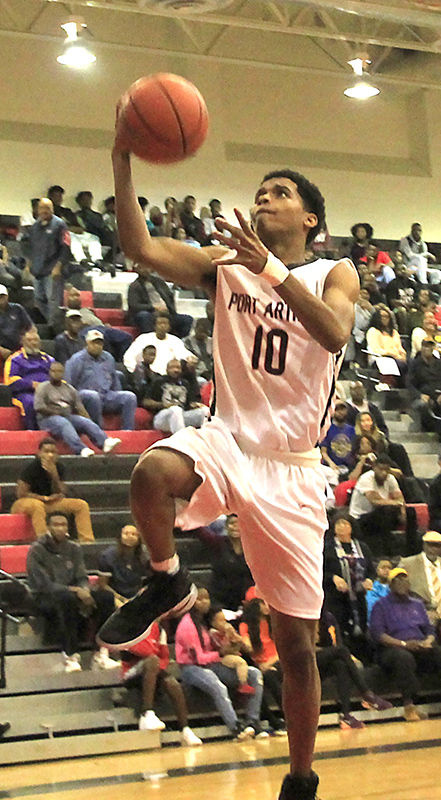 Bishop James of Memorial breaks away for a layup against Central on Tuesday. (I.C. Murrell/The News) 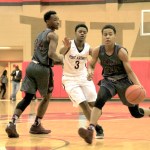 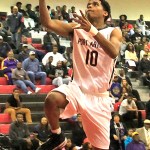 Bishop James of Memorial breaks away for a layup against Central on Tuesday. (I.C. Murrell/The News)

Few teams have found away to withstand the defensive pressure and quickness Port Arthur Memorial displays on the basketball court.

Count Central among those few teams.

Central avoided blowing an entire nine-point lead and knocked down key free throws down the stretch to escape Memorial’s gymnasium with a 64-62 win Tuesday night. The Jaguars, though, had turned up the notch just enough before the Titans could make their run.

“I was proud of the kids,” Memorial coach Kenneth Coleman said. “That’s how it goes, man. We know this is a tough district. We know it’s nip-and-tuck. We know we have to play again. When we go over there, we just have to make up for it. That’s all.”

The rematch in Beaumont is scheduled for Jan. 27.

Memorial (13-5, 1-1 in 22-5A) stormed back from a 44-35 deficit late in the third period and had three chances to either tie or take the lead in the final minute. But the Jaguars found a way to force the Titans into foul trouble for much of the game and took advantage, hitting 12 of 18 free throws in the fourth quarter and 5 of 6 in the final 33 seconds.

“We just tried to stay poised and not crack under pressure,” said Senigaur, a senior swing and power forward. “We had to knock down free throws and lock up every possession. That’s it.”

Off a 5-second inbound violation against Central, Thailan Wesley tipped in a shot to  pull Memorial within 61-60. After two Senigaur free throws, Jomard Valsin putback and airballed three-point shot and Central’s Jaylon Williams made 1 of 2 from the line to make it a 62-60 game.

Darion Chatman, who led the Titans with 14 points, was stripped on a drive to the basket, and Senigaur was sent to the line again with 9 seconds left to push the lead to 64-60. The Jaguars allowed Chatman to drive for an easy two with 3 seconds left and avoided inbounding the ball before time expired.

“It was a chess match. You had to keep each other guessing,” Central coach Franklin Paul said. “They did a good job. They were well coached and well disciplined. My hats go off to them. I’ve been knowing coach Coleman for a long time. He and I share a lot of basketball stories.”

The turbulent pace was in stark contrast to the early going, when Central led 10-8 through one quarter. From there, both teams succeeded at rattling the other in transition and forcing loose balls.

The Titans led by as much as 23-17 following a Tyler Guidry dunk late in the first half, but that lead turned into a 44-35 Central advantage after the Jags went on a 10-2 run that included a pair of three-point shots.

Valsin had nine points, and Reao Keller and Wesley each added eight for Memorial. Williams scored 15 points, Jakobe Dill 14 and Byron Arceneaux 10 for the Jags.

The longest actively serving head football coach in Jefferson County will retire at the end of the month. Larry Neumann... read more