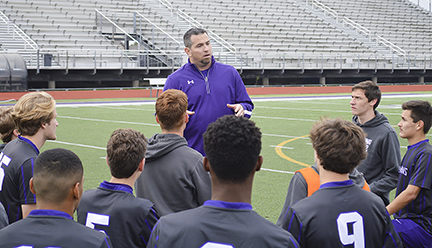 It is soccer season so of course colder temps were on the way.

Luttrull and his Indians host the PNG Kickoff Classic starting today at The Reservation.

“It is almost clockwork,” Luttrull said. “That is the deceptive thing about Southeast Texas. It was hot on Monday and next thing you know we have a soccer match coming up and the weather says it’s going to be 33. It is nothing we are not used to.”

The Indians are coming off a successful season in which PNG reached the second round of the playoffs. PNG was defeated by Angleton in a shootout and went 17-3-6.

“The kids are excited and we as coaches are excited,” Luttrull said about the new season. “The kids have worked really hard and we had two quality scrimmages. We are looking forward to it.”

One of the scrimmages was against the alumni from PNG. It is the perfect scrimmage in Luttrull’s mind because the Indians have a rich tradition in soccer.

“In my opinion, PNG has put out some great soccer players in the past,” he said. “We had guys come back from several years back. We had a really good game against them that ended 6-5.”

The PNG Kickoff Classic puts out quality opponents for the Indians to judge themselves going into the non-district season.

“We take these as building blocks,” Luttrull added. “We are trying to get better. We are going to look back at both our successes and failures and learn from them. Hopefully we will be able to put it all together come the end of January.”
•
Gabriel Pruett: 721-2436. Twitter: @PaNewsGabe

Few teams have found away to withstand the defensive pressure and quickness Port Arthur Memorial displays on the basketball court.... read more